Arnold Schwarzenegger is a Republican and was Governor of California. Tom Ammiano was a member of the California State Assembly. They both did not get along well. In fact, hated each other. There was a bill introduced by Tom in the California Assembly and was passed. It was sent to the Governor for his signature. He declined to sign that into law and sent it back to the Assembly without his signature.

Schwarzenegger's battles with the state legislature are epic. But this just goes way beyond epic. While declining he wrote the following cover letter. 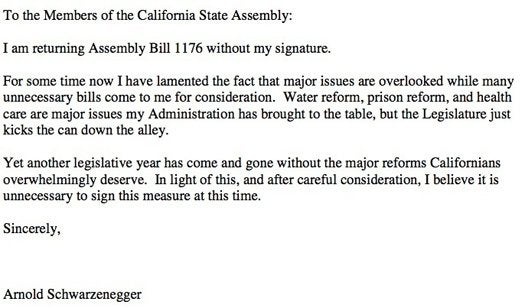 His explanation for rejecting the bill seems very harmless. But it was like a Da Vinci code message that reveals the Governor's true feelings.  Take a look at it closely. Please notice the first letter of every line after “I am returning the Assembly Bill…..” It spells Fxxx Yxx. It was his way of getting back at Tom. Arnold denied, while in office, it was intentional. After he left the office, he admitted the truth. It was a message to Tom and not to the entire Assembly.

This is not a jovial fake letter.   Please google it to find out.
Posted by SG at 5:02 PM