Has anyone watched the soccer game Germany vs. England?

This is what happened in that game.

On the 38th minute, England’s Frank Lampard’s lob bounced over the German goal line and appeared to give England a clear goal. 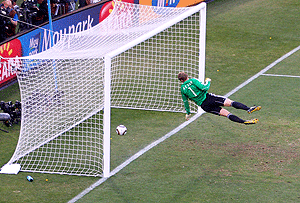 What did the German goal keeper Manuel Neuer do? He grabbed the ball and swiftly kicked it upfield as England’s disbelieving players rounded upon the Referee Jorge Larrionda and begged him to reconsider his decision.

Referee Larrionda decided it was not a goal.

After the match was over, German goal keeper Neuer said:

“After the game I was in doping control and saw it on the television. And yes, of course it was over and should have been a goal for England. It was lucky for us and unlucky for them.

Neuer insisted, though, that the Lampard no-goal made no difference to the eventual outcome Sunday, 4-1, claiming Germany would have won the match in any case.

Neuer is wrong. A goal on them would have devastated them mentally and the outcome would have been different.

We got lucky? That is all? No remorse?

Now it is time to quote from one of my previous posts written long time ago.

Wimbledon. The year 1960. Semi Final Match. India’s Ramanathan Krishnan vs. Australia’s Neale Fraser. A shot from Fraser was called “out” in favor of Krishnan. Krishnan interceded and told the umpire that it was “in”. Krishnan, instead of gaining a point lost a point. Eventually that call was instrumental in Krishnan losing the match to Fraser. First ever Indian going to the Wimbledon finals was denied.

Next week, a Tamil weekly, Kalki, put the picture of Krishnan on the cover and put a caption from (Lord Krishna) Bhagvat Gita: "Paritranaya Sadhunaam vinashaya cha dushkritamDharma sansthapnarthaya sambhavami yugay yugay" (Whenever there is downfall of Dharma (righteousness), I incarnate to re-establish the Dharma.)
Posted by SG at 8:00 PM