Once again an Indian-American won the Scripps National Spelling Bee contest and took the Championship Trophy and $40,000 in cash and prizes. She is Anamika Veeramani, a 14 year old girl from Ohio State. In the finals, she spelled the word “stromuhr” correctly. The meaning: It is a tool that measures the speed of blood through artery. 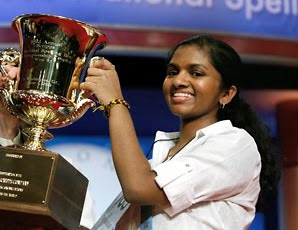 Incidentally, this year’s runner up also is an Indian-American, Shantanu Srivatsa, a 13 year old from North Dakota. Shantanu could not spell the word “ochidore” correctly. (I have no idea what “ochidore” means.) Congratulations to Shantanu also for winning the second prize.

Anamika became the third consecutive Indian-American spelling bee champion. In 2009, the winner was Kavya Shivshankar. The winner in 2008 was Sameer Mishra.

This is the 83rd annual spelling bee contest. Indian-Americans took the trophy in the last eight out of twelve years.

When asked by the reporters, Anamika’s father, Alagaiya Veeramani said he had no clue why Indian-Americans seem to do so well at the competition. He guessed it has something to do with hard-work ethic.
Posted by SG at 6:30 AM