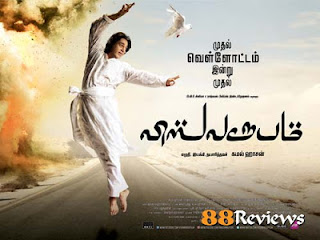 Worth seeing a second time.

Spy thriller.  Will put to shame.

Tamil name (style) is written as though it can be mistaken for Urdu language. Please see the picture above. Even when the title was shown on the screen, the name was written from right to left, imitating Urdu language.  What message Kamal Haasan wants to give through this? I don’t know.

Saw a mistake in the acknowledgements.  List of people they were thanking included “U.S. Embassy, Chennai”.  (Since I was able to see only a few seconds, I could be wrong.  But almost sure I am right.)  U.S. Embassy is in .  What they have in Chennai is U.S. Consulate.

The fighting scene between the U.S. Air Force and the Talibans were awesome.  Want to see the movie again just for those scenes only.

Kamal Haasan is an atheist.  He has this habit of making subtle fun of people who believe in God and also the Tamil Brahmin community.  He did not fail to do that also in this movie.  For example, he and his wife were shown as Tamil Brahmins speaking their own slang.  He was cooking chicken for his wife.  In the movie he says he is a vegetarian but his wife loves chicken.  Of course, quite a number of Brahmin girls nowadays eat chicken.  But it is considered most of the Brahmins are vegetarians.  (By the way, Kamal Haasan is a TamBram.)

He also uses the word “papaathi”.  Only once in a kind of humorous way.  It is a derogatory term for a Brahmin woman.

A lady character was being interrogated by a female FBI Agent.  This lady character mentions God.  The FBI agent asks: Which is your God? Allah?  The lady character says “No. My God has 4 heads”.  (Or, did she say 4 hands? I cannot rewind in a theater like I do my DVR at my home.)  Kamal Haasan's subtle way of making fun of believers.

Oh I forgot to mention.  The Talibans (about 10 of them) shoot with their AK 47, a photo of Ex U.S. President George Bush several times, during their training mission.  I was LMAO.  I know most Americans will do the same thing.  Because it is only a movie.  Make believe stuff.  (Updated on Jan 30 - People should view and enjoy movie as a movie.)


Imagine an Indian movie depicting some terrorist shooting the picture (just picture only) of Sonia G or Manmohan S. with AK 47! What would be the reaction!!
I did not see anything against Muslims.  The story happens to be about Talibans.  All Talibans are Muslims.  Therefore, most of the characters happen to be Muslims.  That is all.

In the end, Kamal Haasan shows that he already is planning a Part 2 of this movie.

I know Indian TV serials have illogical and unbelievable stories.  I never watch them.  In our home, we have Tamil Sun TV only.  This is for the benefit of my wife.  She watches a few serials.
My wife briefs me once in a while what is happening in those few serials she watches.  Here is one story in a serial that is beyond unbelievable.
There is a girl.  She gets married and lives with her husband and his parents.  They (all 3) ill treat her.  They ask her to go back to her parent’s home permanently.  She refuses.  Why she refuses?  Here is her reason:
Her uncle thinks she is happily married.  She does not want to disappoint him.  Therefore, she will stay in the in-law’s home and willing to suffer.
Now, the husband and his parents are taking advantage of this.  They tell her that she will be treated as a household servant in their home.  She agrees.  She should address them Amma and Ayya (Tamil words for a servant to address the masters).  She agrees.  Husband should be addressed as “Sir”.  She agrees
They find a second wife for the son and the son marries the new girl.  The second wife treats the first wife even more harshly.  The son and his parents enjoy this.
The son and the second wife goes to the bedroom every night and the first wife sleeps in the hall, on the floor.
Why the first wife willingly goes through this?  She does not want to disappoint her uncle who thinks she has a happy married life.  This is happening in 2013? Give me a break.
If you can think of any more bizarre incidents that can be added to this story, please let me know.  I will forward them to that serial’s director.
Seriously, come to think of it, I enjoy the story for pure fun.  I won’t watch the serial.  My wife’s weekly synopsis is enough.
Posted by SG at 5:29 PM 26 comments: