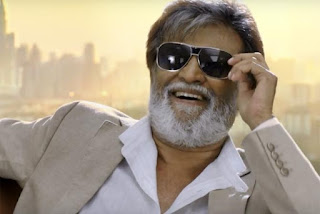 Just returned (Friday, July 22) home after watching Kabali (Tamil) in a theater in Dublin, California. The following is not a review. Just my impressions.
I went for a matinee show. Today being a working day, there were only about 30 people. I am told it is house full for Saturday and Sunday.
For the first 5 minutes all conversation were in Malay. For a moment I thought I bought a ticket for the Malay language version. But the credit titles were in Tamil. So I was relieved.
Even now I do not know what the story is. All I understand is it is one gang versus another gang in Malaysia. Good gang vs. bad gang. But they are all gangs.
There was no big fanfare when they introduced Rajni Kanth in the movie. I was kind of disappointed.
This movie will be loved by hard core Rajni Kanth fans. The fans love the way Rajni Kanth walks. So they show him just walk so many times. The fans love his laugh.  So the Director makes him laugh in several scenes - some for no reason.
Superb acting by Radhika Apte. Especially, when she meets her husband and daughter in Pondicherry.
The song “Vaanam Paarthen” is pleasing to the ears.
The usual Rajni kanth punch dialogues are there:
There is a reason for Gandhi going shirtless and Ambedkar wearing a suit and a tie.
If you have a fear, don’t show outside.
In Malaysia Tamil, Sarakku means pombala samacharam (women matter). In Tamil Nadu, Sarakku means thanni (liquor)
More than 500 people are shot “dead” in the movie from beginning to end. Are there no police in Malaysia to arrest anyone?
Rajni Kanth does not have that “oomph” any more. He looks old.

Disappointed.  May be because of over-hype prior to release.
Tamilians are always Tamilians wherever they live. There were 3 guys and a lady in the audience. The lady was constantly recording portions of the movie at various times in her cell phone. I wanted to tell her to stop taping illegally. But I controlled myself. They were 3 guys and I am only one. I can handle one on one. But against 3 of them? Better sense prevailed and I kept quite.

(* this is just for fun,  playing with rhyming words for humor)

Last week I was reading Ms. Kala Ravi’s blog for the first time. Excellent Blog. The post I read in her blog made me remember an incident that happened to me in real life.
An acquaintance of mine (please note not a friend) requested me to get a job for his niece in my company. The main reason for my agreeing is the fact that my wife was a friend of his wife. Strong recommendation (translation: Pressure) from the spouse.
The niece, fresh out of college, is a bright and intelligent person. I talked to a few people and, bingo, she got hired.
This idiot, the acquaintance, who requested me to arrange a job for his niece, thanked me. Let us call him Andrew. Andrew invited me for lunch to express his gratitude. I told him it is not necessary. But he insisted. So, I agreed to go for lunch with him in a restaurant.
He comes to my office. We both go to a nearby restaurant. Food was ok. Conversation boring.  At the end of the lunch, the bill came. He was searching his pocket. Looks like he forgot his wallet. He does not have his credit card or cash. He told me to wait in the restaurant and he will go to the bank and cash his check and come back and pay the bill.
I asked him how long will it take. He said it will take 45 minutes. Can you imagine me sitting in a restaurant for 45 minutes after the waiter gave the bill to pay, while he has gone to get money from the bank!
I offered to pay the bill myself as I have to rush back to my office. He agreed. I paid the bill thru my credit card. We come out of the restaurant.
He wished me good bye and said “Thanks for the nice lunch”. He was very casual as if I invited him for lunch. Guy has no shame.
Never heard from him again about this incident.
Posted by SG at 3:42 PM 26 comments:

"Recognition is a secret weapon that every leader really needs to use," said former CEO of Yum! Brands David Novak. He also said 80% of people feel they are not recognized by their supervisor for what they do, and 60% say they value recognition as much as money.
Recognition is not just a nice thing to do. It is also a communication tool to tell the people the actions and behavior you want to see.
Here are a few pointers.
Recognition should be immediate. On the spot.
It should be public in front of the peers.
Cash is not the effective recognition. It is temporary and intangible. It should be something people will remember. For example:
All expenses paid 3 day and 2 night package for 2 in a resort. Two tickets to a soccer or a cricket match or a musical concert. Two movie tickets on the opening day for a new movie. Have a Wall of Fame and place the employee’s photo and name. Decorate his/her office/cubicle.  Something along these lines.
If you are a manager, do you recognize your employees? If so, how?
If you are an employee, does your company have an “immediate” recognition program? If so, what kind of recognition?
Posted by SG at 11:25 PM 23 comments:

Just read in an Indian newspaper that the Trichy Airport will be closed for visitors until July 7. It is as a result of a terrorist attack in an airport in Istanbul, Turkey.
I am wondering if these government guys “room potta yosipanga?”. The English translation is “do they reserve a room and meet there to think like this?” It is a metaphor for idiotic thinking.
I can understand if they tighten the airport security. I can understand if they close the airport for visitors PERMANENTLY. What is the benefit of closing the airport for visitors for a week or 10 days only? Did the terrorists tell them “hey, we will be in Trichy until July 7 and then we are moving on”.
The reason for writing this post is I am still angry at what happened two years ago.
Two years ago we visited Madurai. Photography is allowed inside the Meenakshi Amman Temple for a fee. But we could not take any photo inside the Temple and Aayiram Kaal Mandapam (Hall of Thousand Pillars) because the week before our visit, there was some bomb blast in Hyderabad. Therefore, they prohibited any camera inside the Temple temporarily for 10 days. If they banned cameras permanently I can live with it. I do not understand the logic of temporarily banning cameras inside this Temple for 10 days as a result of a bomb blast in Hyderabad.
There is a saying in Tamil “Kumbakonathil idi idithaal Kutralathil mazhai peyyum”. In my English translation, I will change the names of the cities for better understanding. Here goes: If there is a thunder in Ahmedabad, it will rain in Allahabad. Same way – Bomb blast in Hyderabad, ban cameras for just 10 days in Madurai. That too, only during our visit.
These government officers, mostly IAS cadre, room pottu yosippanga.