This is really not a big surprise as she has been the front runner for the VP role.  Indians can be happy because her mother is from Chennai, Tamil Nadu. Kamala spent a lot of vacation time during her childhood in Besant Nagar, Chennai. Her mother and grandfather taught her carnatic music and bharathnatayam. 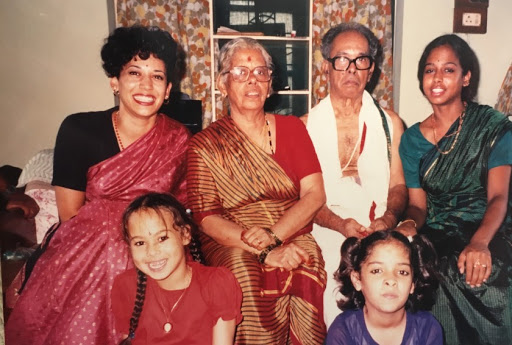 P.V. Gopalan, Her sister Maya Harris.  The kids: Maya's daughter and a cousin

Here are some pros and cons regarding Kamala Harris.

She is highly educated.

She has held a solid number of public jobs - District Attorney in San Francisco, Attorney General for the State of California, U.S. Senator from California.

She is a great debater.

She comes across very well in front of the camera and on television.

She is also loved by the black community in America.

She is very ambitious.  A little too ambitious and opportunistic.

She knows that Biden will be a one term president only (four years) and it's highly possible that he won’t even finish his one term due to his advanced age and mental capacity. Therefore, she will have her own agenda instead of implementing Biden’s agenda.

She implemented the 1994 Crime Bill to the fullest. The bill was written by Joe Biden and approved by President Bill Clinton. It resulted in mass incarceration and innocent people were put in prison..

She has a "sugar daddy", Willie Brown, Speaker of the California Assembly. He made sure she was moving up the political ladder but in return what did Kamala was doing the forbidden dance with Slick Willie.

She is a big proponent for medicare for all. Many Americans aren't supportive.

So what do I think of Biden's pick for VP?

I don't think Harris is a bad pick at all.  However, I do not think she was the best choice.

I believe Susan Rice would have been a better running mate (also minority female).  She was the National Security Advisor for Barrack Obama.  Rice was also U.S. Ambassador to the United Nations.  Rice is also highly educated and she graduated from Stanford University and Oxford.

Can Biden/Harris defeat Trump/Pence in November?