Therefore it is potentially difficult to declare a sure winner on November 3.  The Electoral College  may not be able to select the winner.  Even if there is a winner, the loser will likely go to the Supreme Court.

What if there is a deadlock?  There will be a Contingent Election.

The newly elected House of Representatives will vote for the President.  Here is the tricky situation.  Each State has one vote irrespective of number of congressman from each state*.  Therefore 50 votes for 50 States. Whoever gets 26 votes will be declared winner.  Right now Republicans have majority in 26 States.  If this continues  after the election also, Trump will be declared as a winner.

The Vice President will be elected by the Senate.  Each Senator has one vote.  There are 100 Senators.  Who ever gets 51 votes will be declared as Vice President.

President Bill Clinton was impeached in December 1998 for his affair with Monica Lewinsky.  He was later acquitted by the Senate.  He was very angry at the Independent Counsel Ken Starr.  He wanted to take revenge.

Clinton was supposed to leave office on January 20, 2001 at noon.  You know what he did?  One hour before he left office (at 11 am), he pardoned 145 criminals.  These people have no connection with Clinton.  Also, they never asked for pardon from the President.  He selected criminals in jail at random across the nation.

Now coming to President Trump.  Except Fox News, every television media and every newspaper have only bad words for him.  If he did something good, it was in the 8th page of a newspaper.  If there was a mistake, it was first page headline for several days.  Same goes for the Democratic Party also. They were all limousine liberal media.

President Trump is now taking revenge on the entire liberal media including the Democratic Party.   Lucky for him, Justice Ruth Bader Ginsburg passed away on September 18, less than 2 months before the November 3 election.  Without wasting any time, Trump immediately nominated Amy Coney Barrett.  Since Republicans have majority in the Senate, she is expected to be approved and become a Supreme Court Judge  before November 3 election.  The conservatives will then have a 6 to 3 majority.

President Trump will have achieved two main things.  He packed the court with conservatives (3 were appointed by him out of the 6).  This way, the liberals and Democrats will never win a single case in the Supreme Court for the next 20 years.

Second,  in case there is a dispute on the November 3 election results and goes to Supreme Court, 6 judges (out of 9) are Trump supporters.  They may say they are impartial.  To quote President Abraham Lincoln, action will speak louder than words.

I just saw Kamala Harris's disrespectful smirk on her face through out the debate  with Vice President. 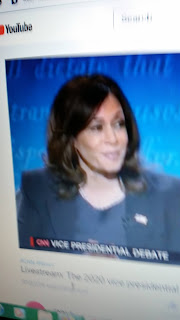 But because of Kamala Harris, I am going to abstain from voting.

There is news all over the world that President Trump has been tested positive for the coronavirus.  The whole world is concerned.  Some are happy and some are worried.

Here is my personal opinion

I want to use President Trump's favorite words.  FAKE NEWS.

He is capable of doing anything to achieve his goal.

There are only three reasons I can think of for this news.

1. Either he is afraid to debate "Sleepy Joe" Biden again

2. He can say he recovered "proving" that covid is no big deal

3. He thinks he will lose the election and this is a graceful way to withdraw from the race.

PS: This blog post is a result of having a discussion with a friend of mine.