Few minutes ago, I was reading the Yahoo News.  One of the news was Republican Candidate for U.S. President, Donald Trump today visited Mexico at the invitation of the Mexican President.  They had a private meeting.
We all know Trump wants to deport millions of illegal immigrants back to  Mexico.  He also wants to build a loonnngggg wall on the border to prevent illegals crossing into USA and have Mexico pay for building it.
Former President of Mexico, Vicente Fox, did not like this meeting.
Here are their (Donald Trump and Vicente Fox) pictures as appeared in the Yahoo News. 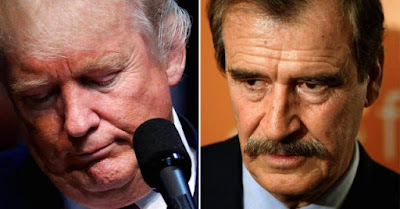 The 2016 Summer Olympics is now underway in Rio De Janeiro, Brazil. The previous one in 2012 was in London, England. At that time, Britain’s tourism agency had issued guidelines on the etiquette of dealing with thousands of foreign visitors who would come to attend the games. The advice that were given by the tourism agency was for those who were likely to work with tourists arriving from foreign countries. This includes people such as hotel staff, taxi drivers, etc.
I think most of the guidelines issued by them are still applicable to Rio Olympics also.
I am reposting some of the guidelines: (My own interpretation is given in brackets)
For people from the Middle East – Never be bossy with them. They are not used to being told what they can’t do. (Sir, please don’t strap that bomb on your chest while you are in my taxi. I am just making a request, Sir.)
For the Polish – They don’t like be stereotyped as drunks. (Would you like a tall glass of Vodka with your breakfast, Sir?)
For the French – They are very picky in restaurants. (No Sir, we don’t have escargot here and no croissants as well. However we do have FRENCH fries and FRENCH bread.)
For the Argentineans – They don’t like jokes about their clothing or weight. (Sir, please use the stairs when you are going up to your hotel room. Our elevators have a weight limit. Also, please remember that only wearing underwear and black business socks is not appropriate attire at our swimming pools.)
For Indians - They are in general, an impatient lot, and like to be quickly attended to. The more affluent they are, the more demanding and brusque they tend to be. They also don't like being touched by strangers and may be suspicious about the quality of food. (I don’t vant to stand in queue. I vant my dal and rice immediately. Don’t touch me. My mommy will be mad. I have to call her and explain to her vhy you touched me. I don’t like Feijoada. All I vant is 2 idlis and 3 buckets of sambar.)
China and Hong Kong – Winking or pointing with an index finger is rude. They don’t like to talk about failure, poverty, or death. They are unimpressed by the landmarks that are only a few hundred years old. (Thank you Sir, for building HUGE and impressive Olympic buildings in 2008 for the Beijing Olympics. I hear that they are unused and failing miserably. Welcome to Rio. We (pointing to my chest) won’t make the same mistake as you. (pointing with index finger) wink, wink)
For Mexicans – Don’t discuss poverty, immigration or earthquakes. They prefer to talk about history and art. (Sir, I would like to hear about the history of East Los Angeles. Sir, do you personally know Maricopa County Sheriff Joe Arpaio?)
For  Canadians – They will be annoyed about being mistaken for an American. (Sir, I will never mistake you for an American. So far you have spoken 3 sentences and all of them ended with “eh”. My name is John Doe, eh. You are also here for the Olympics, eh. I like pizza, eh.)
For Americans – They are so informal to the point of being very direct. They won’t hesitate about complaining. (Now that we are in Rio, I want some real American food. Where can I get a burrito or some pizza? Why is everyone a foreigner in Rio? I am going to enjoy this vacation…even if it’s going to kill me.)
Posted by SG at 9:12 PM 40 comments:

This is my 350th post.
I could have written this 350th post two years ago. But I took leave of absence in 2011 and 2012. I wish I had not taken that leave of absence. The reason is the person to whom I want to dedicate this post is not in this world any more. She passed away a few months ago in a freak accident.
She is the love of my life. She was my number one fan and my severe critic. She would give her comments only after I have published any post. She did not even want to read the post before publishing. She said she wanted to be my commenter and not my editor.
I started this blog in June 2009. I got my first award from a fellow blogger and friend, Neha, in September 2009. My wife was so happy as if I have won the Pulitzer Prize for Literature. She wanted me to call Neha in India immediately and thank her personally. I told her it is very common to get these awards from fellow bloggers and it is midnight in Mumbai and I do not know the phone number of Neha.
Anyway, this post is dedicated to Lalitha.
May she rest in peace.
Nenjam Marappadhillai
Adhu Ninaivai Ishakkavillai
Heart does not forget
It did not lose the memories
Posted by SG at 9:47 PM 44 comments: