The 14th Amendment of the U.S. Constitution addresses many aspects of citizenship and the rights of citizens. It states all persons born or naturalized in the United States are citizens of United States. This amendment was ratified on July 28, 1868. It was intended to include former slaves (as equal citizens) who had just been freed after the civil war.

But the present day reality is anyone born in the United States is automatically becomes a U.S. citizen, under this 14th Amendment. This includes people who are in USA illegally and also people who come to USA just to have a baby and return home with a US Citizen.

This has become a major political issue in the upcoming Presidential election. Mr. Donald Trump says 14th Amendment is unconstitutional and those kids and their parents have to be deported. He is supported by many Americans on this issue.

These babies are called “Anchor Babies”. There are about 400,000 anchor babies born each year in USA. Since most of the parents are illegal immigrants, they don’t have any money. The government is paying for everything for these families – from hospital delivery charges to k-12 education to breakfast and lunch program to English as 2nd language education.

There are about 4 million illegal immigrant anchor babies in USA. Mr. Trump wants all these babies and their parents deported to their countries. He says birthright citizenship is “out of date”.

But the question is is it possible? Is it practical? to deport that many number of people.

With Trump leading the polls, there is never a dull moment.

Next U.S. Presidential Election is on Tuesday, November 8, 2016, to replace Barrack Obama He cannot stand for reelection because he can be President only for 2 terms.

The members of the 2 political parties (Republicans and Democrats) are already in full swing to decide who is going to be their party’s candidate. There are 17 people are in the field for Republican Party including Donald Trump and Bobby Jindal. There are 3 in the Democratic Party including Hillary Clinton.

In India, if there is an election, the candidate to represent the party and contest will be decided by the respective party headquarters/leaders. It is not like that in USA. The people will have to elect the candidate to contest the general election. The Chairman of the Party or the senior most leaders have no say in who will be elected to contest the election. 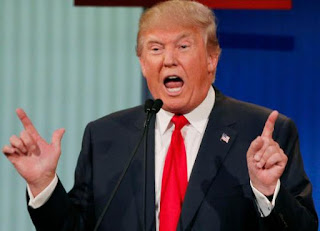 Why the Republican leadership hate him? Since he is not a career politician, he does not give “politically correct” speech. He does not sugar coat. He is very blunt and tells the audience what is really on his mind. He said nasty things about illegal immigrants from Mexico. Other Republican contestants do not want to touch the immigration subject for the fear of losing Mexican/Spanish votes.  He also dissed other Republican leaders.

Mr. Trump has declared that if he is not treated with respect by the fellow Republicans, he will run for the President of USA as an independent candidate (if he did not get the nomination). This has created fear/terror among all the Republican leaders. If Mr. Trump runs as an Independent candidate, it is absolutely certain Republicans will lose and Hillary Clinton will easily win.

Last Thursday, a Republican supporting television network (Fox News) arranged a debate among these 17 candidates. At the start of the debate, it was very clear that the whole program was staged to destroy Mr. Trump. Here are the first few questions of the debate – addressed only to Mr. Trump:

Is there anyone on stage, and can I see hands, who is unwilling tonight to pledge your support to the eventual nominee of the Republican party and pledge to not run an independent campaign against that person.

Mr. Trump, one of the things people love about you is you speak your mind and you don’t use a politician’s filter. However, that is not without its downsides, in particular, when it comes to women. You’ve called women you don’t like “fat pigs, dogs, slobs, and disgusting animals.”

When someone hits at Mr. Trump, he always hits back with more force. The second question was asked by a lady television moderator during the debate. Now Mr. Trump is going after her with nasty comments about her.

I am an independent and do not belong/support any party. But here is my issue. These questions are fine if you are “interviewing” a candidate. But this was not an interview. This was a “debate” with several candidates participating. Did the moderators ask any personal questions to other candidates? No. National issues like Economy, Immigration, Defense, Foreign Policy must have been the topics.

Still 14 months left before the election. More fun/entertainment is yet to come.
Posted by SG at 4:59 PM 36 comments:

Business Insider magazine has named the following 19 people as the “smartest” people in the world.

Please do not check with Google or Yahoo. Of the above 19 “smartest” people in the world, how many can you immediately recognize? I can recognize only 5.

If one has high IQ, is he/she really smart? I think not. My opinion IQ tests only measure how well you take IQ tests. May be they are genius.

Just because you can knock off your opponent’s “king” piece with your “knight” piece, that makes you the smartest person in the world?

My grandmother was the best “Aadu Puli Aattam” (Lambs and Tigers Game) player. No one in our village or the surrounding 18 villages can beat her.  If this game was played at the international level, my grandma would have been the undisputed champion of the world. That makes her the smartest person in the world? Here is the wikipedia for the Aadu Puli Aattam.

Often people with extremely high IQs have poor social skills. So how smart can someone really be if they have issues interacting with humans? People with average or even low IQs often have a better grasp of basic social cues.

Even if you call them “smart”, in my opinion, they are only book smart and not street smart.