Ditka in the News

Mike Ditka is in the news again.   He was the most popular American Football  Coach for the team Chicago Bears. 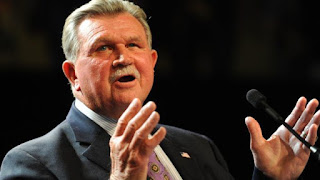 He said yesterday athletes who kneel during the national anthem to “get the hell out of this country”.  Quite a few athletes are planning to kneel during the playing of national anthem in support of Black Lives Matter.
“If you can’t respect our national anthem, get the hell out of the country. That’s the way I feel. Of course, I’m old-fashioned. So, I’m only going to say what I feel,” Ditka said.
He was also in the big news in 2004.
Barrack Obama, virtually unknown at that time, ran for the U.S. Senate. He had slim chance of winning.  His Republican challenger was leading.   A month before the election, he was caught  in some scandal.   So he had to withdraw.  The Republican Party  asked Mike Ditka to run against  Obama.  The party even begged him.
Ditka refused because he wanted to concentrate on Football. Ditka was more popular in Chicago and the State  of Illinois than Sachin Tendulkar in Mumbai and Maharashtra.  Had he  accepted to  run for the Senate, Obama would  have lost his deposit (to  use an Indian term).  And that would have been the  end of his political career.

PS: Blogger.com has made some changes.  I don't even know how to create a new post. I had a post that was in draft stage and wrote on that.  May be I am not tech savvy.

This is not a story. This really happened.

A couple went to the pound and picked up a cute dog. They named him John. The couple trained John in all the dog stuff like listening to command, potty training, etc. But the one problem was the dog will stand near the couple’s bedroom silently all night, looking at them until they wake up in the morning. He won’t bark.He won’t make any noise. Even when the lights are off, he will stand in the dark quietly looking at the couple thru darkness. This happened every night for 3 months.

The couple was annoyed. They fixed a video camera to find out what the dog does when they are asleep. In the morning when the couple played the video, the dog was standing outside their bedroom and stood all night looking at them.

They then decided to close the bedroom door. They saw, by playing the video camera, the dog stood outside the door looking at the closed door all night.

They took him to a few veterinarians. They could not find any answer. But one veterinarian suggested inquiring about the previous owner at the dog pound if the dog did the same thing to them.

They go to the pound and told the problem with the dog. Then the story came out from the pound people.

The previous couple who owned the dog was having their first baby and therefore they did not want to have a dog in the house. So they left the dog in the pound. But what they did was in the middle of the night they took the sleeping dog and left them in the pound. The dog went to sleep in his cozy bed and when he woke up in the morning he was in a pound with strange people and strange dogs. This was a big shock for the dog.

So it was explained that the dog kept awake all night outside the master’s bedroom so that this does not happen to him again.

Then they slowly trained the dog differently. They made the dog sleep between them for a while until he was able to sleep in his own bed.

Sad story but a happy ending.

You may have heard these stories before. If so, please bear with me. 3 stories.

Editor told him the fire on the aircraft carrier was the biggest national and international news. And this idiot did not grab the opportunity to cover that.

There was a shoe company. The owner sent one of his sales managers to an African country to find out if his company has any opportunity there. He goes there and comes back and said no one in that country is wearing a shoe and therefore we don’t have an opportunity.

He sends another sales manager to the same country. He goes there and comes back and said no one in that country is wearing a shoe and therefore we have lot of opportunity to sell shoes to all of them.

The above 2 examples may be fiction. But the following really happened.

A female TV reporter in Seattle went to the Bill Gates’ home to interview him. During the interview, the reporter asked him the secret behind his being rich. Bill thought for 3 minutes before answering her.

Mr. Gates took his check book back from her. And he said: You could have walked out of my home as the richest TV reporter in Seattle. I gave an opportunity and you did not grab. The reason I am rich because I do not miss an opportunity that is presented to me.
Posted by SG at 9:24 PM 19 comments:

Kannadasan was an atheist and later became a believer. I remember he wrote the following lines in a poem:

I was an atheist.
But He was not afraid of me.
I became a believer.
But I cannot find Him.

I recently had a chance to read a poem in Tamil written by Late Kannadasan. I thought I would translate that. But, of course, we cannot convey the real meaning of the words from the original language into a translated language. OK, here is the translation of that poem.

Are you afraid? Are you agitated?
Is your mind distressed?
Turbulence in life?
Thousand things will happen in life.
Tragedy in almost all entrances.
Whatever may be the cause of suffering
Just worrying will not make them go away.
If you have a heart to bear anything.
You will have peace of mind until the end.
Make the poor mind a big mansion.
Compose poem day and night.
And Dedicate all days from tomorrow to God.
And find peace for the rest of your life.
There are millions of people suffer more than you.
Think of that and seek content.

Stabilize your mind.
Do your duty with detachment.
Surrender to God.
Posted by SG at 8:31 PM 16 comments: