This is a true story.  It happened a long time ago.

There was an American in India employed there.  When he came back to San Francisco after his assignment he brought with him his cook.  (In those days it was very easy to sponsor a personal servant).  The cook, Jambunathan, was a Tamil guy and his English very poor.  In those days, there were not that many Indians in the Bay Area and that too Tamilians are almost nil.  Jambunathan was feeling lonely.

His American employer met the Indian Consul General and explained the situation.  I knew the Consul General very well.  One day he called and asked me to help Jambunathan adjust to life here and socialize with him.  I agreed.  One day this Jambunathan came to my house.  He was about 55 at that time.  His wife and 4 kids were living in Tamil Nadu.  He was so deferential he won’t even sit in front of me.  He brought sweets for my family.

He used to come to our home during holidays like Diwali, Pongal, Tamil New Year, etc.

One day he came to our home and started to cry.  He said he had a fight with his employer.  The employer said if he leaves his employment he has to go back to India and cannot stay in USA.  I asked if he has any papers.  Fortunately, he had his Indian Passport.  I looked at it. At the last page, I saw his Green Card number.  (The American employer conveniently took Jambunathan’s Green Card at the SFO Airport immigration.)

I told him the whole truth.  I said I will get a duplicate Green Card for him.  I went to the Immigration and Naturalization Office and got a form to fill out to request for a replacement Green Card for the lost one.  I received another Green Card within 10 days.  I gave it to Jambunathan and told him not to tell his employer. I also told him to keep it safe and this is his permission to stay in the USA for as long as he wants to.  He was very happy.

After a few months he came.  He said he found a job at the home of a millionaire in Los Angeles.  I wished him well.  He left.  Never saw him for another 3 years.

One day he came to my home unannounced.  I asked him where he is working now.  He was hesitant to tell me.  I asked him a few times.  He said “amma irukanga. Adhunala solla mudiyala” (Your wife is standing here and listening.  So, I hesitate to tell you).  I told my wife to go to the other room.

This is what he said in Tamil. I will paraphrase in English.

“I was working with this millionaire in Los Angeles.  His daughter graduated from college and admitted to a reputed university in the Bay Area for her master’s degree. She is 23.  Her father bought a flat for her in the Bay Area so that she can live there and go to the university.  They also sent me to cook for her and take are of the flat.  That girl loved my cooking so much she started to love me.  Now we both live in the flat like husband and wife”.

I asked him if her parents knew this.  He said no.  I told him what he is doing is not right.  Even if she fell in love with you, you should have advised her properly because you are as old as her dad.

He left my home.   Never saw him afterwards.

I had ordered a new credit card from a company called Capital One. Their credit cards are popular and it is a decent company. Here is the strange thing.
I have not received the credit card yet. Once I receive the credit card I have to call Capital One and activate it. Then only I can use it to charge any expense.
I was looking my online account for that card. There is a charge for $996.00 from a company called Agoda.com. I checked in the internet and it is a travel plan company.
I called Capital One. They immediately cancelled the unreceived card. They also immediately gave me a credit for $996.00. I am very pleased with Capital One.
They are sending me a new credit card.
My question is how can someone get hold of my card and charge on it when I have not yet received it and activate.
I thought someone stole my mail. But I received that card by mail this evening.
Posted by SG at 9:05 PM 13 comments:

President Biden came to Dover Air Force Base to receive the 13 deceased U.S. military personnel.
These 13 U.S. military personnel were killed during the Kabul airport bombing. Their coffins draped in U.S. flag came to Dover Air Force Base. President Biden, as Commander In Chief, came to receive them. While coffins passed by him, Biden kept looking at his watch. 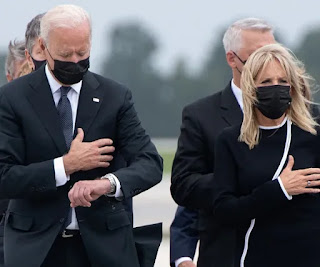 Many people said this was a clear disrespect for the fallen soldiers. I do not think so. He could have had many other reasons. Here are some of them:
May be it was time to change his diapers.
May be he was admiring his new watch he got for his birthday.
May be he was hungry and late for his lunch.
May be he was checking how long he has to stand because his legs were hurting.
May be he did not know where he was (Dementia?).
May be he was bored.
May be he was afraid he would miss his favorite TV show.
May be he thought this was interfering with his nap time.
Please let me know if you know any other reason. Thanks.
Posted by SG at 11:38 AM 22 comments: