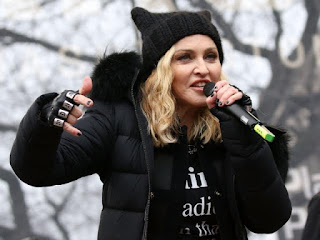 Madonna (Courtesy: Yahoo)
There was a Women’s March on Washington on Saturday to protest against President Donald Trump. One of the speakers was the famous singer Madonna. During her speech she said she thought about “blowing up the White House”. White House is the place where the President and his family lives.
The Secret Service whose job is to protect the President of the United States and his family is not amused. They said they are going to make a thorough investigation of her claim.
The moment she heard that the secret service is on her case, the roaring lion turned into a pussycat.
Now she issued a statement as follows:
'I spoke in metaphor and I shared two ways of looking at things - one was to be hopeful, and one was to feel anger and outrage, which I have personally felt. However, I know that acting out of anger doesn't solve anything. And the only way to change things for the better is to do it with love.'
So it was a metaphor. When she is in trouble with the Secret Service, she starts to back peddle immediately. Not so courageous after all.
You have a right to be angry and outrage at the President. You scold him. You ridicule him. You even make fun of him. But don’t ever threaten his life.
I think the Secret Service should make an example out of her. Otherwise, anyone can threaten the President of the United States and claim it was only a metaphor. Some crazy may even take up on Madonna’s thoughts. Hope it never happens.

I have read many blog posts during the last few weeks about Ms. Jayalalithaa. All of them addressed her as Dr. Jayalalithaa. Many leaders, actors, and others who were condoling her passing away, addressed her as Dr, Jayalalithaa. Watched them in Youtube.
Her arch rival (or should I call her bête noire) in Tamil Nadu is always addressed as Dr. Karunanidhi.
I was wondering which medical school these people attended. Ms. Jayalalithaa was a high school graduate. Mr. Karunanidhi did not even enter high school. They both were given honorary doctorate degree from some university.
According to the book, Honor & Respect, the Official Guide to Names, Titles & Forms of Address, recipients of honorary doctorates are not entitled to be addressed as Dr. except at the granting university.
I don’t know why these important well known people are given honorary doctorate degrees. They don’t need this degree to advance their career. Funny thing is you don’t even need to be a human being to get an honorary doctorate degree. In 1996, Southampton College in New York awarded an honorary doctorate degree to Kermit the Frog.
Hope the Indian politicians who are given honorary doctorate do not start wearing stethoscope around their neck.
Hope they do not compel the party members to come to them if they need medical advice or any surgical procedure.
It is also illegal to use the Padma awards (Padmashri, Padma Bhushan, etc.) as a title in front of one's name.  But almost everyone in India who received these awards are addressed with these titles.  I have seen many many tamil movies "starring Padmashri Sivaji Ganesan" (title credit at the beginning of these movies).