A Bombay High Court Judge Pushpa Ganediwala has ruled that groping a child through their clothes  not amount to sexual assault. The guy was fondling a 13 year girl’s boobs without removing her clothes. That is OK with that Bombay High Court Judge. According to the judge the accused did not make skin to skin contact.
The same judge, in a different case, ruled unzipping a girl’s pant or holding her hand do not amount to sexual assault.
This is one extreme judgement. I wonder how the judge would have ruled if the victim is her own daughter or any relative. In my opinion she should be dismissed from the job.
Indian Attorney General called the judgement “very disturbing” and brought this to the attention of the Indian Supreme Court.
Different country, different judge, similar case – same day
In Malaysia, a female judge Gunasundari (Malaysian Tamil), for a similar case (a man sexually assaulting a 12 year old girl) sentenced him to a corporal punishment of 24 caning and 1050 years in jail.
This is another extreme judgement. Caning 24 times as a corporal punishment is fine. But 1050 years in jail? Is this a show off? Does the judge expect him to live 1050 years? If she wanted him never to get out of prison, she could have given a judgement of 125 years in jail without parole. (He may not live for more than 100 years,  125 years just to be on the safe side.)
What do you think?
Posted by SG at 10:30 AM 17 comments:

The hatred TV media (especially CNN) has for Trump doesn't allow them to recognize anything good he did. To be fair and objective, here are a few samples:
He ended gag orders on pharmacists which had prevented pharmacists from sharing money-saving information with customers.
He added new tools to help states fight sex trafficking.
He signed a law requiring airports to have a space for breast-feeding mothers.
He signed a law to fund $10M/year to clean plastic and garbage from the ocean.
He enforced a provision of the Affordable Care Act forcing hospitals to publicize their prices with another executive order.
Competitive corporate tax rates.
He ordered the military to totally destroy ISIS and they did.
He is the first president in forty years not to start a war.
Posted by SG at 2:16 PM 14 comments:

President Donald Trump was impeached again for the second time by the House of Representatives.  What a waste of time and money.

Nothing will happen by impeaching him 1000 times unless the Senate convicts him.  Senate Majority Leader (the current leader) Mitch McConnell said he will not even bring the matter for discussion until after Trump leaves his office at noon on January 20.

Even if the impeachment proceedings by the Senate were taken up after he leaves office, will there be 60 votes (out of 100) to convict him? I doubt it.

My advice to Democrats.  Just leave him alone and he will leave office in a week.  By impeaching him you are giving more popularity and publicity.

This will also give Trump a great campaign speech in 2024.

"Look, I pissed off the democrats so much that I was the only President to be impeached twice by them.  Therefore, all democrat haters vote for me".

The relevant text of the Constitution reads as follows: "The President, Vice President and all civil officers of the United States, shall be removed from Office on Impeachment for, and Conviction of, Treason, Bribery, or other high Crimes and Misdemeanors." (Article II, Section 4)
Posted by SG at 5:13 PM 14 comments:

January 6, 2021. The joint session of U.S. Congress (House of Representatives and Senators) was meeting to count the electoral college votes from each state and declare who won the presidential election. This joint session was presided over by the Vice President Mike Pence.
While the counting was in progress, thousands of hard core supporters of Donald Trump marched to the U.S. Capitol. They were instigated by President Trump. Violence broke out and the mob breached the perimeter. They broke down the barriers. 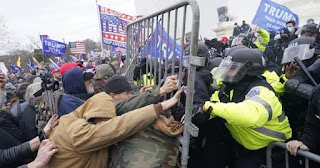 Trump supporters forced lawmakers to evacuate the Capitol and stop the formal count of the 2020 Presidential Electoral College Votes.
The Capitol Hill Police could not control the situation. They asked for help from the National Guard. They arrived promptly and brought the situation under control. 4 protesters died. One person was shot dead. Three others died because of “medical issue” as per the police.
Joint Session of Congress finally, after a 6 hour delay, certified Joe Biden as the next U.S. President.
My thoughts:
Rioting is a bad idea. If they think there was election fraud, go to the court and file a suit with strong evidence. Storming the Capitol building will not change the electoral college votes.
Trump has only 12 days as President. Now there is talk of invoking the 25th Amendment to remove Trump from office. That is another stupid idea. This will bring more riots and mayhem.
There is a talk of arresting or impeaching Trump. This is a useless idea. President can pardon anybody for any crime. Most likely, Trump will pardon himself, his family, his advisors and his friends. Can he pardon himself? It was never done before. U.S. laws do not say anything about a President pardoning himself. If he does that, there will be law suits. Finally, Supreme Court will decide.
My advice: Hey you lost the election. Instead of rioting, work towards the 2024 election.
As the famous American Football commentator, “Dandy” Don Meridith would sing at the end of the football game
Turn out the lights. The party is over.
Posted by SG at 3:48 PM 9 comments: