Need to Know the Truth

There is a famous Tamil movie line “enakku oru unmai therinjaganum” (I need to know the truth). So here goes.

Everyday I read news from 4 news organizations, Two American and two Indian. One of them is the online edition of NDTV News. I always wondered what they are thinking when designing their pages. They have a header with the title INDIA NEWS and on the same page SOUTH NEWS. Please see below. 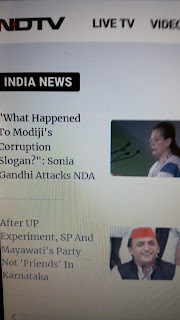 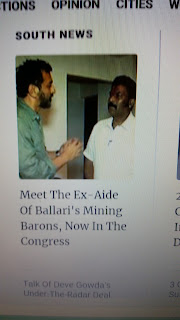 I always thought South India is also part and parcel of whole India. Then why INDIA NEWS and SOUTH NEWS separately? I can understand if they show NORTH NEWS, WEST NEWS, EAST NEWS, and SOUTH NEWS. Don’t they consider South is also part of India?

If someone knows the answer, I would appreciate.
Posted by SG at 12:39 PM 19 comments:

Gautam Gambhir was captain of the IPL (Indian Premier League) cricket team, Delhi Daredevils. Since his and his team’s performance were not to his satisfaction, he decided to relinquish the captaincy. He also decided to play for free of charge this season and decided to forego his salary of Rs.2.8 crore.
(To my non-Indian readers:  Cricket is the only game where the captain is the deciding authority on the field and off the field.  In other sports, the coach or the manager is the deciding authority.)
That is a class act. As stated in NDTV, he puts pride above everything else. This also shows his love for the game.
As I am writing this, my thoughts go out to Pete Rose, one of the greatest professional baseball players.
To say that Pete Rose loves playing baseball is quite an understatement. Let me give 2 examples of his love for baseball.
1 - He once said in an interview that he will play baseball even if no one paid him any money to play. He loves the game so much that he’ll play for free.
2 – During his games, whenever he got a “Ball 4 - Walk”, he would run as fast as he could to first base, instead of just walking to first base. (Non Baseball readers: If you do not understand the game, it is OK). This is just an example to show Pete’s enthusiasm for playing the game. He is like a 12 year old boy, playing a game with friends on the weekend, in the middle of the street.
Pete should have been elected to the Baseball’s Hall of Fame. He was denied because he was accused of betting on baseball games. Betting on baseball games is legal in Las Vegas but players are not allowed to bet.
What kind of bets did Pete make? He always made bets for his team to WIN. He never made any bets for his team to lose.
I think Pete Rose should be in the Hall of Fame. He does not deserve a life time ban from the Hall of Fame.

PS:  Here is a hypothetical question.  If Virat Kohli bets a few dollars that India will win the next T20 World Cup, will you support banning him from cricket forever?

I was reading an article about Famous Amos.  It is the brand name of a fast selling cookie in USA.  The company was founded by a guy named Wally Amos.
While reading about Famous Amos, my thoughts went to famous Indian emmus (M.S.) I am aware of and/or read about.  Here they are:
M.S. Subbalakshmi – Needs no introduction.  Carnatic music singer.  Awarded Bharat Ratna.
Dr. M.S. Swaminathan – Father of India’s green revolution.  Responsible for high yield varieties of wheat and rice.  Awarded Padma Vibhushan.
M. S. Viswanathan – Music Director. King of Light Music. Composed songs for more than 700 Indian films, mainly for Tamil, Malayalam, Telugu films. Even today millions of people are mesmerized by his melodies.
Dr. M. S. Venkataramani – A doyen of American studies in India.  Professor emeritus at the School of International Studies, Centre for American and West European Studies, at the Jawaharlal Nehru University.
M. S. Gurupadaswamy – Freedom fighter.  Politician. Indian National Congress and later Janata Party.
Mani  Shankar Iyer – Famous or notorious? Will leave it up to the readers.  Belongs to Indian National Congress.  The more he talks the more BJP wins.
M. S. Dhoni – Needs no introduction.  Cricketer.
M. S. Golwalker – Former Chief of RSS.
M. S. Ramaiah – Engineer, Educationist, Philanthropist
M. S. Rajeswari – Playback singer, South Indian movies.
If you know any famous M.S. please share with us here.
Friday afternoon now.  Looks like I have too much time on my hands. 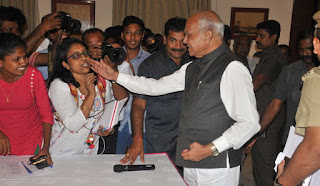 Tamil Nadu Governor Banwarilal Purohit was having a press conference in Chennai. At the end of the press conference, while leaving the podium, the Governor patted the cheek of a woman journalist Ms. Lakshmi Subramanian.

I agree what he did was not a custom in Tamil culture. Patting the cheek or touching the head of a younger person by an older person is an honorable North Indian custom.

But this woman journalist and a few political parties are making this a big issue. The woman journalist wrote an email to the Governor telling him she did not appreciate that pat on her cheek, The Governor sent a reply to her apologizing for this. She is still angry.

This woman journalist is now giving lot of interviews to various channels about this horrible incident that happened to her. A few political parties are making a big deal out of this incident. They are asking the Governor to resign and go home. A Chennai Press Club member is charging the Governor with “outraging the modesty of a woman”.

This woman journalist says she washed her cheek several times but could not get rid of that disgusting feeling.

Oh yeah? Come on. Suppose President Obama visits Chennai and you were one of the reporters at his press conference. At the end of the press conference Mr. Obama kisses you on your cheek or hugs you. What will you do?  Kissing on the cheek and hugging are American custom and not a Tamil culture.

Also, you will be giving interviews how lucky you are because Obama singled you out..
Posted by SG at 5:30 PM 24 comments:

I was at a get together recently. A Tamil iady addressed her husband as “Aththaan”. I was pleasantly surprised. Nowadays, almost no Tamil woman address her husband by that word.
The actual meaning of “Aththaan” is either he is her dad’s sister’s son OR mom’s brother’s son. That word always has a romantic connotation in Tamil Nadu.
When some girl says, fondly, he is my aththaan , it is understood he is the guy she intends to marry.
In Tamil culture, a girl can legally marry her dad’s sister’s son OR mom’s brother’s son. I know it will be disgusting to our North Indian readers. Actually, 50 years ago 70% of the Tamil marriages were within close relatives. My mom and dad are related. My brother married his aunt’s daughter. No, I did not marry any of my cousins. I married an outsider.
I asked that lady in that get together if she and her husband are related before marriage. She said no. Still she addressed her husband as "aththaan".
So many romantic songs in Tamil movies with that word. For example:
Aththaan varuvaga. Oru mutham koduppaga (Aththaan will come. He will give me a kiss).
Aththaan en Aththaan. Avar ennaithaan. Eppadi solvenadi (Aththaan he is my Aththaan. How can I say what he did with me.)
Kulungum mundhanai sirikkum aththaanai viratuvathenadiyo (Why the shaking loose end of your saree is chasing out this Aththaan)
Akkaluku Valaigappu. Aththaan mugathiley punsirippu (Baby shower ceremony for elder sister. Aththaan’s face is full of smile.)
There is a dialogue in a Tamil movie (Bangalore Naatkal). A guy is telling his close associate what kind of wife he wants. One of his condition is the girl should address him as Aththaan after marriage.
Posted by SG at 7:29 PM 18 comments: 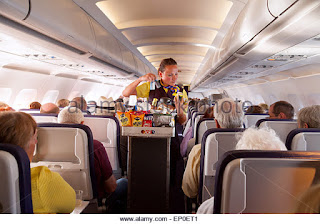 (Courtesy: Yahoo. File Photo)
A few weeks ago I was traveling from Oakland, California, to Seattle, Washington. The travel time is one hour and 34 minutes. I was in the economy class.
After ascending the desired altitude, they started to serve drinks. In the economy class you have to pay for the alcoholic drinks. Soft drinks are free.
When the stewardess asked me what I want, I asked for 2 scotch with water. I then gave my credit card. While giving the credit card to her I casually mentioned how nice of this airline to offer beverages to passengers when the flying time is only one hour and 34 minutes.
When she heard my compliment, the stewardess smiled and thanked me. She returned the credit card without charging and said the drinks are on the airline.
My lucky day.
(Side bar: American pilots take too long to turn off the seat belt sign even after reaching the desired altitude. The stewardesses do a great job of taking care of more than 125 passengers within an hour.)
I was narrating this incident to my son and daughter. My daughter said “Appa, you are a smooth operator”. My son said “Appa, you a hustler”.
Posted by SG at 4:13 PM 28 comments: