Cricket is a religion in India. Everyone in India knows minute details about that game. I thought I also knew. But only last week I realized I am not that much expert on cricket. Why?
Indians are familiar with cricketing terms like boundary, sixer, beamer, googly, doosra, and even LBW. Oh, I forgot about the Silly Point. I don’t know if there is a smart point also. But have you heard of a term called “Mankading”. I have not. Now I know. Probably you are aware of that term.
This term is named after the famous Indian cricketer Vinoo Mankad. His 100th birthday is this month – April. He was one of the best Indian all-rounder. When anyone mentions Mankad in conversation, I immediately think of his world record first wicket partnership of 413 runs with Pankaj Roy against New Zealand in Madras (Chennai).

Mankading is the act of a bowler running out the batsman at the non-striker’s end as he is backing up rather than actually bowling the ball. According to cricket rules, it is legal and the bowler is permitted to so this. Even though it is allowed under cricket rules, it is considered an “unsportsman like conduct” if a bowler does that. As per cricket etiquette, the bowler is supposed to warn the batsman.
Vinoo Mankad used this tactic for the first time in cricket history during India’s tour of Australia in 1947. There was a lot of controversy about his action. Very few supported him. Don Bradman was one of them. So the term Mankading is named after Vinoo Mankad.
I personally support mankading. Otherwise, the non striker may stand half way down the pitch and score easily a tight single.
PS: To my US Readers. This is somewhat similar to “pick off” in baseball.
Posted by SG at 9:58 AM 27 comments:

Nolan Ryan, one of the greatest professional baseball players of all time, now retired, was in a ball park watching a baseball game. The gentleman who sat next to him did not notice Ryan. But he was wearing Nolan Ryan’s famous jersey number 34 with his name on it. Probably he was not even aware of who his seat mate was. 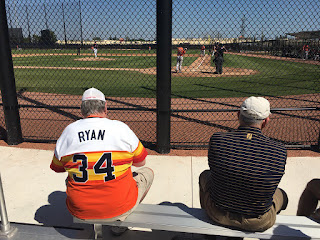 (Courtesy: Yahoo.  Ryan on the right.)

This happens to me also all the time. People have no clue who I am.
Once I was watching a cricket match in the Wankhede Stadium.  Someone pointed out to me that the guy who was sitting next to me was Sachin Tendulkar. I turned around and said “hello”. He replied with a “hello”. I asked him “how about an autograph?”. He said “sure”. I then signed my name in a piece of paper and gave it to him.
PS: This is supposed to be a humorous post.
Posted by SG at 1:37 PM 30 comments:

I recently met a lady from Canton, China. It is now known as Guangzhou. She said she is 54 years old. Looks like 24. Her physical fitness is like that of a 14 year old gymnast. She is 5 ft tall and says she weighs 106 lbs.
She speaks English but broken English.
She informed me she is a teacher and has two children. (She did not tell me and I did not ask about her husband). She also said she exercises 6 hours a day including walking and cycling.
She was more interested to know about India and the Indians than America and the Americans.
Here are some her questions to me. (I am not giving my answers to her because it is not important, me think)
Do I read bible?
Do I go to church?
Why I am not wearing a head-dress (turban)?
Do I eat at home sitting on the floor and everyone eats from the same plate?
Is it true women wait for men to finish eating before they could eat?
Is it true, if there is no leftover food after men finish eating, women go to bed hungry without eating?
Do I eat with my fingers?
Do I know how to us a chopstick?
Do I speak Hindu language at home?
How do I practice my culture in this country?
Posted by SG at 11:10 AM 38 comments:

Don’t Get Mad, Get Even

(This is purely a tongue-in-cheek post)
I often quote these words from the late Robert Kennedy:  Don’t get mad, get even.
In the recent times I have read in many Indian newspapers VIPs (including MPs and Ministers) slapping public servants if things don’t go their way. These public servants include airline employees and police officers.
Then these VIPs express “regret”. Remember not an apology but just a “regret”.
Can the public do the same? Slap the VIPs and express regret afterwards. No. They cannot do such things. The strong arm of the law will put them in jail for many years.

I have a few ideas about how to get even with these VIPs.  Flight Attendants can do a lot in this regard. FAs, please don't resort to your usual tactic of getting revenge - spitting on the food served to that VIP or picking up the dropped food from the floor and serving it to that VIP.  In these instances, you will have the satisfaction of getting revenge but that VIP will never know.

Here are 2 ideas by which the VIP will realize that someone is taking revenge on him/her.
First idea is while these VIPs are flying. This involves precise coordination between the pilot and the flight attendant. When the plane is at the 35000 feet level the captain should turn on the “fasten seat belt” sign indicating a bumpy weather. The flight attendant should be bringing the coffee in the aisle. When she is near that VIP, the captain should “jerk” the plane for a nano-second. The flight attendant should simultaneously pour the hot coffee on the VIP’s head. And then say:
Oops. Very sorry. Bad weather. Turbulence.

If this "turbulence" happens to him/her more than once, then the VIP will get the picture.
The second idea is a much better one. We have read news items how foreign diplomats get away with any crime claiming diplomatic immunity. All we have to do is to find a diplomat who will accept a bribe. There are plenty of them. Have that diplomat beat the heck out of this VIP and then claim diplomatic immunity. No one can do nothing to that diplomat. And, he does not even have to “regret”.
You have any ideas?

As the (in)famous J. R. Ewing said revenge is the single most satisfying feeling in the world.
Posted by SG at 3:49 PM 33 comments:

There is a robotic engineer in China. Because of China’s “one child” policy, there are more men in China than women. This engineer was unable to find a bride to marry. Therefore, he decided to marry a robot he built. He married this robot in a simple ceremony attended by his mother and friends. 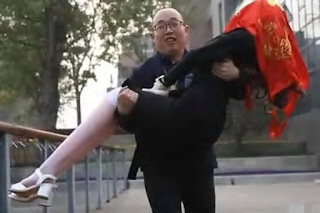 I want to wish them a happy married life. But, ever since I read this news item, I have these nagging questions in my mind:
Where are they headed for their honeymoon?
Is there a prenuptial agreement?
Was this consensual?
Will they adhere to one child policy of China?
Is she high maintenance?
Will she be included in his company health insurance?
Is she a trophy wife?
In case of divorce, who gets the home?

Joint Bank Account?
Will she get widow’s pension in case he dies?
Will she get social security based on her husband’s work record?
Can he claim deduction for her in his income tax return?
I have so many other questions. Since this is a family blog, I will stop here.  If you think of any other question, please let me know.  Thanks.
Posted by SG at 6:56 PM 32 comments: