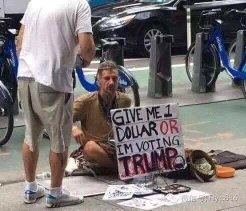 What a Way to Win

November 19, 1999. The TV contest: Who Wants to be a Millionaire. Host: Regis Philbin. Contestant: John Carpenter. He won.
John did not just win the game, he won it with style. He was the first-ever to reach the million-dollar question. There were several lifelines. He did not use any lifelines. But during the very last question, he called his father.
During the last question, Regis Philbin asked the following question:
Which of these U.S. presidents appeared on the television series Laugh-In?
A. Lyndon Johnson
B. Richard Nixon
C. Jimmy Carter
D. Gerald Ford
He saw the question. Just smiled and called his father for help. When his dad answered the call, the host gave the question to John’s dad and passed the call to John. Here is the conversation between John and his dad.
John: Hi dad.
Dad: Hi.
John: I don’t really need your help. I just want to let you know that I’m going to win the million dollars. Because the President that appeared in Laugh-In is Richard Nixon and that’s my final answer.
John got the right answer in the best possible way. He got to the million-dollar question without using any lifelines, only using it to tell his dad that he knew that answer all along. He’s the first-ever to win the game to top it all off.
What a way to win.
Posted by SG at 11:22 AM 7 comments:

In the 100 member Senate, there are 50 democrats (including 2 independents who support them) and 50 republicans.  To convict him, they  need 67 votes.  Everyone knew they cannot get 67 votes to convict him.  Waste of time and money.

It was evident at the very beginning.  They had a vote whether the trial at the Senate is legal or not since Mr. Trump had already left office.  56 Senators (all democrats and 6 republicans) voted it is legal.  At this stage it was evident "this dog don't hunt".

After the arguments were over, the final vote was 57 senators (all democrats and 7 republicans) voted Mr. Trump is guilty.  43 republican  senators voted not guilty.  So Mr. Trump was acquitted again for the second time.

The whole drama begins now for the next 4 years.

I was watching the arguments from both sides.  I thought the prosecutors (House Managers) did a slightly better job.  After everything was over, Nancy Pelosi (Speaker and second in line to become President) came on tv.  I take umbrage what she said.  She said those republican senators who voted not guilty are cowards.  What if some republican senator says Nancy Pelosi and the democrats are "mentally retarded"?

This is uncalled for.  If there is a court case, and the judgement was 5 to 4, you don't call 4 dissenting judges "cowards".

This will come back to haunt Biden and the democrats.   Republicans are dangerous.  They don't forget easily.  They have a long memory.  They can give lot of trouble to President Biden.   In 2022 or 2024 if they become majority they may bring impeachment proceedings against Biden or Obama on some trumped up charges.

In my previous post, a reader (Destination Infinity) wrote the following comments.
“I wonder how a competitor was not shown the finish line beforehand. These are standard procedures at that level. In spite of that if someone is confused, it's a UX issue which is rare at big events. It's possible that the entire episode was rigged to generate a newsworthy incident. I hope not.”
I was going to reply there. Then I thought it may be a long reply. So I decided to make this reply a blog post by itself.
Thanks for your comments Rajesh. I certainly do not think it was rigged to generate a newsworthy incident. What could be their benefit in rigging this? It was an international competition and already a newsworthy incident.
Make a mistake or a gaffe is entirely possible however meticulous you are. Here are a few example.
S. M. Krishna, India’s then Foreign Minister was about to speak at the United Nations Security Council. Behind him seated and helping him with the speech were 4 Indian Foreign Service Officers and his deputies and secretaries. What S. M. Krishna did? He read a prepared text from the speech given by the Portuguese Ambassador. Five minutes into the speech Indian team realized the mistake. Then Mr. Krishna took the correct Indian prepared text and started to read.
President Bill Clinton was about to give an important State of the Union Address to the joint session of the Congress in 1994. All the House of Representatives, all the Senators, the entire cabinet members (except one*), all the 9 U.S. Supreme Court Judges, and chiefs of different U.S. military branches, and ambassadors from almost every country in the world were present. And, millions of Americans were watching.
When he started to give his speech he realized his teleprompter was loaded with the wrong speech. He had to stop and ask his assistants to load the correct speech in the teleprompter.
In 1976, President Gerald Ford was speaking in a conference. His prepared draft speech was reviewed by several people. President Ford said “There is no Soviet domination of Eastern Europe, and there never will be under Ford Administration".
Everyone in the world knew, in 1976 Russia was completely dominating the entire Eastern Europe.
Therefore Rajesh, mistakes can happen anywhere however prepared you are.
* Before the President gives the State of the Union Address, he always designates a Cabinet Member to stay away from Washington, DC, during his address.  Reason: In case the whole U.S. Capitol Building came under attack and everyone dies, at least one Cabinet Member will be alive to take over as President.
Posted by SG at 11:37 AM 10 comments:

It was December 2012. Cross Country Race in Burada, Navarre. Kenyan Runner Abel Mutai was leading followed closely by Spanish Runner Ivan Fernandez. A few yards before the finish line, Mutai got confused where the finish line was and stopped running thinking he crossed the finish line and won.
Ivan Fernandez realized Mutai did not know where the finish line was. He shouted in Spanish asking Mutai to keep running and finish. Mutai does not understand Spanish. Ivan Fernandez then pushed him from behind to cross the finish line and win the race.
After the race was over, a reporter asked Fernandez why did he let Mutai win the race. He said I did not let him win, he was going to win. The race was his.
The reporter insisted you could have won the race by overtaking Mutai. His reply was a class act.
“What would be the meaning of my victory? What woud be the honor of this medal? What would my mother think of this medal?"
Posted by SG at 10:33 AM 13 comments: