Joe Biden has publicly stated he will select a woman as his Vice Presidential Candidate. He also said he would name that person before May 1. That is why I have to publish this post in a rush.
According to media reports he is considering the following candidates:
Kamala Harris, Senator, Black/Indian
Amy Klobuchar, Senator, White
Elizabeth Warren, Senator, White
Gretchen Whitmer, Michigan Governor, White
Stacey Abrams, Ran unsuccessfully for Governor of Georgia, Black
Catherine Masto, Senator, Hispanic
Tammy Duckworth, Senator, Asian-American
Vel Demings, Congresswoman, Black
Tammy Baldwin, Senator, White
Michelle Grisham, New Mexico Governor, Hispanic
I think Biden offering the Vice President slot to a woman is a consolation prize. He should select a candidate with legislative and executive experience. Vice President job is very important and more important this year considering Biden’s age (77) and his rumored health condition. If Biden wins the Presidential race, his Vice President should be ready to take over (potentially) on day one. This is no place for on the job hands on experience.
If I were Biden, I would choose any of the following:
Pete Buttigieg, Former Mayor, Rhodes Scholar, young, 38 years old, White
Andrew Yang, Entrepreneur, Lots of great ideas, young, 45 years old, Asian-American
Julian Castro, Served in the Obama Cabinet as Secretary of Housing and Development. Was a short listed Vice Presidential candidate for Hillary Clinton in 2016, young, 45 years old, Hispanic.
If Biden has to Choose a woman and that too a minority, I have 2 recommendations:
Tulsi Gabbard, Congresswoman, Samoan-American, First Hindu Member of U.S Congress (took oath of office with Bhagvat Gita in her hand). Out of the box thinker, Served the nation in the Military (She is a Major), deployed in the war zone both in Kuwait and Iraq, more republicans like her than democrats. Young, 38 years old. She could make a lot of republicans to vote for Biden. She won’t be selected by Biden because the “powers” in democratic party hate her. She got into a fight with Obama for not using the word radical Islamic terrorism. During the 2016 primary, she criticized Hillary Clinton and the Democratic national committee. Tulsi has now sued Hillary for defamation for $50 million for calling her a “Russian Agent”. Will Trump drop the sitting Vice President Mike Pense and select Tulsi? Wishful thinking.  Not likely.
Biden said he will select a woman to be his Vice President. But never said a woman belonging to Democratic Party. He is at liberty to select a candidate from the opposition Republican Party also. There is a perfect candidate for him. Condoleezza Rice, Woman, Black, 65 years. Former U.S. Secretary of State, Former U.S National Security Advisor, Former Provost of Stanford University. She could make lot of republicans to vote for Biden. Ready to take over as President in a minute. Is Biden considering Rice? I don’t know.
If I were a betting man I would put (Biden choosing) one dollar on Kamala Harris and another dollar on Amy Klobuchar.  Dark Horse candidate is Stacey Abrams.
Posted by SG at 5:46 PM 16 comments:

Uma Madhusudan is a doctor. She works in South Windsor Hospital in Connecticut. Because of her dedication many lives were saved. How did the people in that city thanked her for that? Please see the video below:

On May 18, 2018, I wrote a blog post titled “Negging” That is Donald Trump’s often used modus operandi.
According to New Statesman:
Negging, as it is called, is in essence a trick. The idea is to undermine a woman's confidence by making backhanded or snide remarks—give a compliment with one hand, and take away with the other. It is about control, putting the man in charge of the interaction by pushing the woman to earn his approval...
Mr. Trump was using this tactic against his opponents to make them vulnerable. He used this tactic against Mexicans (They bring drugs, they bring crime, but some of them are good people) and against his opponents (So and so is a good man but…..). Hillary Clinton was the worst Secretary of State but her husband was the best President.
Why I am writing this blog post today? President Trump has used this tactic again with Prime Minister Modi. Trump wanted anti-malarial drug. hyroxychloroquine, from India. India had banned the export of that drug. Trump said:
"I didn't hear it was his decision. I know that he stopped it for other countries (but) I spoke to him yesterday and we had a very good talk... I said we'd appreciate you allowing our supply to come out. If he doesn't allow it to come... there may be retaliation," Mr Trump said, referring to his Sunday phone call with PM Modi.
After India allowed the export of the drug, hours after the warning, US President Donald Trump called Prime Minister Narendra Modi "great" and "really good".
This is classic “negging”.
Posted by SG at 3:58 PM 19 comments:

I was meaning to write this blog post 6 months ago. But could not do so for some reason or other. I think now is the appropriate time.
There are a few pizza shops in Philadelphia. Many customers visiting those shops pay for a slice of pizza (I think it is $1 for each slice) and leave the receipt on the wall. Any person who doesn’t have money and hungry can take this pre-paid pizza receipt from the wall and buy pizza to eat from that shop. 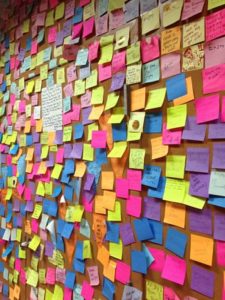 This has become so popular among the customers, there are now more pre-paid receipts (approximately 70,000) than the demand in those pizza shops.
I was really moved and impressed.
Since then I was thinking this idea can be implemented in India. Indians are equally generous and compassionate. Very timely now because after the coronavirus ‘stay-at-home’ order is lifted there will be quite a few hungry unemployed persons without money. People who can afford can prepay for food and leave the receipt in a wall in that hotel (restaurant). They don’t have to do it every day. Once in a while is enough. If many people do this once in a while, that would be lot.
I am not talking about 5 star restaurants where it cost lot of money. I am talking about run of the mill hotels (restaurants), mess, and street food places. A nominal amount, say Rs.50, is enough. This is just a guess.  I have no idea how much it would cost.
This will be a win win situation for all. The establishment owners have the money paid in full on hand even before they make the food. The person who paid for the food will have the satisfaction of helping the community impacted by this world/national emergency. The poor hungry person gets to eat.
If I were in India I would contact a few hotels (restaurants) and start this program. Unfortunately, I am not there. Any of you readers or your friends active in social media can organize a project to implement this worthy cause.

PS:  The above is only a general idea.  People familiar with the local custom and behavior can device their own way how to distribute the donor receipts.
Posted by SG at 6:00 AM 20 comments:

Just read a news item Prime Minister Modi had consutations with elite sports persons on the ongoing situation in India due to the coronavirus pandemic. I could not help LOL. If he appealed to them for donations then that is a different matter. “Consultations” with them? What is their expertise? Cricket players’ only expertise is they know how to connect their bat with a ball. Boxer Mary Kom expertise is in throwing a right-handed jab.
When did they become subject matter experts on coronavirus? What is the agenda for next week? Video conference with roadside tea stall owners?
Here are some other useless consultations:
President Donald Trump called baseball player Alex Rodriguez seeking advice on corona virus response. This noted infectious disease expert Alex Rodriguez’s only qualification is he knows how to hit a ball out of the park for a home run.
Biden wants to compete with Trump. He has established a Public Health Advisory Committee to advice him on corona virus. Hey Uncle Joe. What are you going to do with that advice? Trying to form a shadow government, ala a British tradition?
PS: Here is a news you will chuckle. Yesterday (April 2) the Governor for the state of Georgia, Brian Kemp, said he just learned about how coronavirus spreads. Governor of a state in USA did not know how coronavirus spreads?  Come on Brian.  Give me a more believable story.
Posted by SG at 11:19 AM 16 comments: