Ilayaraja is 32 years old. His lover Kalaiselvi is 24 years old. They have been lovers for the past 10 years. Kalaiselvi’s parents were against this marriage. Therefore, they have threatened both the boy and the girl. The lovers did not listen.

Meantime, Kalaiselvi’s parents decided to fix a marriage for her daughter with some other guy. When the lovers heard this, they complained to the police. Police summoned parents of both parties and told them these two are majors (adults) and advised them for amicable settlement. Kalaiselvi’s parents did not agree.

Ilayaraja took the girl to his parents’ home. They were to be married in a few days in front of his relatives and friends.

On the early morning of the marriage, the bride’s (Kalaiselvi) relatives came with swords and other weapons and beat the heck out of Kalaiselvi and left. She lay in a pool of blood with multiple wounds.

She was admitted to a hospital in Tanjore. She is in the ICU with multiple wounds. Her life is in danger. The groom does not want to lose/separate from her. He tied the holy knot thali (mangal sutra) at the exact auspicious time, 10:30 am, in the ICU.

This is not a fiction Happened last week in Tanjore District in Tamilnadu. Please see the picture below: 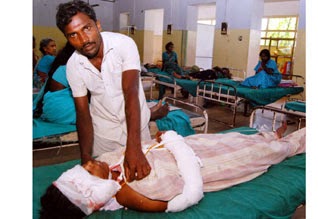 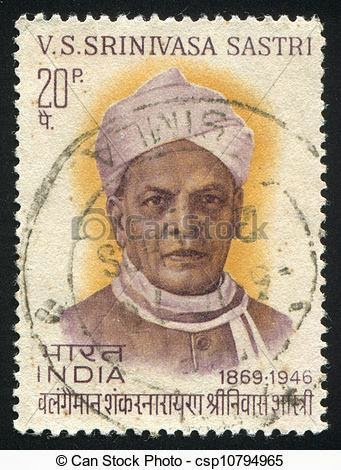 Today is the death anniversary of “Silver Tongued” Srinivasa Sastri.

He was born in Valangaiman near Kumbakonam in Tamilnadu on September 22, 1869 and passed away on April 17, 1946.  He was born to a poor gurukkal (temple priest).  After graduation he became a school teacher.

Mr. Sastri joined the Indian National Congress but resigned protesting against the non-cooperation movement. Even though policywise he was against Mr. M. K. Gandhi, they both were personal friends.   Mr. Gandhi addressed him as his elder brother.

He participated in many international conferences on behalf of India. Mr. Sastri became world famous because of his command over English language and oratorical skills. Whenever he visited U.K., many people consulted him on English spellings and pronunciations.

His mastery over English language was recognized by King George V and and Winston Churchill. Lord Balfour remarked that listening to Srinivasa Sastri made him realize the heights to which the English language could rise.

The British conferred upon Sastri the appellation "Silver Tongued Orator of the British Empire".

Mr. Gandhi sent him the first copy of his newspaper “Harijan” for review. Mr. Sastri sent that back after correcting 27 mistakes. It is said that the British Prime Minister Lloyd George postponed his cabinet meeting for a few hours so he could listen Mr. Sastri speak.  Prime Minister George said he was shy to speak his own mother tongue after listening to the chaste delivery of Sastri.

The best tribute for him came from “I forgot his name now”. It is:

We stayed in Puerto Vallarta only for 4 days. Two days were spent on functions related to the marriage. That left us only 2 days for sightseeing. There were so many things to see but short of time. So we looked up the website and found the “top 10 things to do” in Puerto Vallarta. We decided on the first 3 and visited them. They are:

The Malecon (Board Walk) is a 2 mile walk along the beach. Only pedestrians are allowed. No car No bike. Beautiful scenery. It is the most popular and fun place to visit. We enjoyed the ocean, the beautiful statues along the way. Lots and lots of shops for drinking and eating. 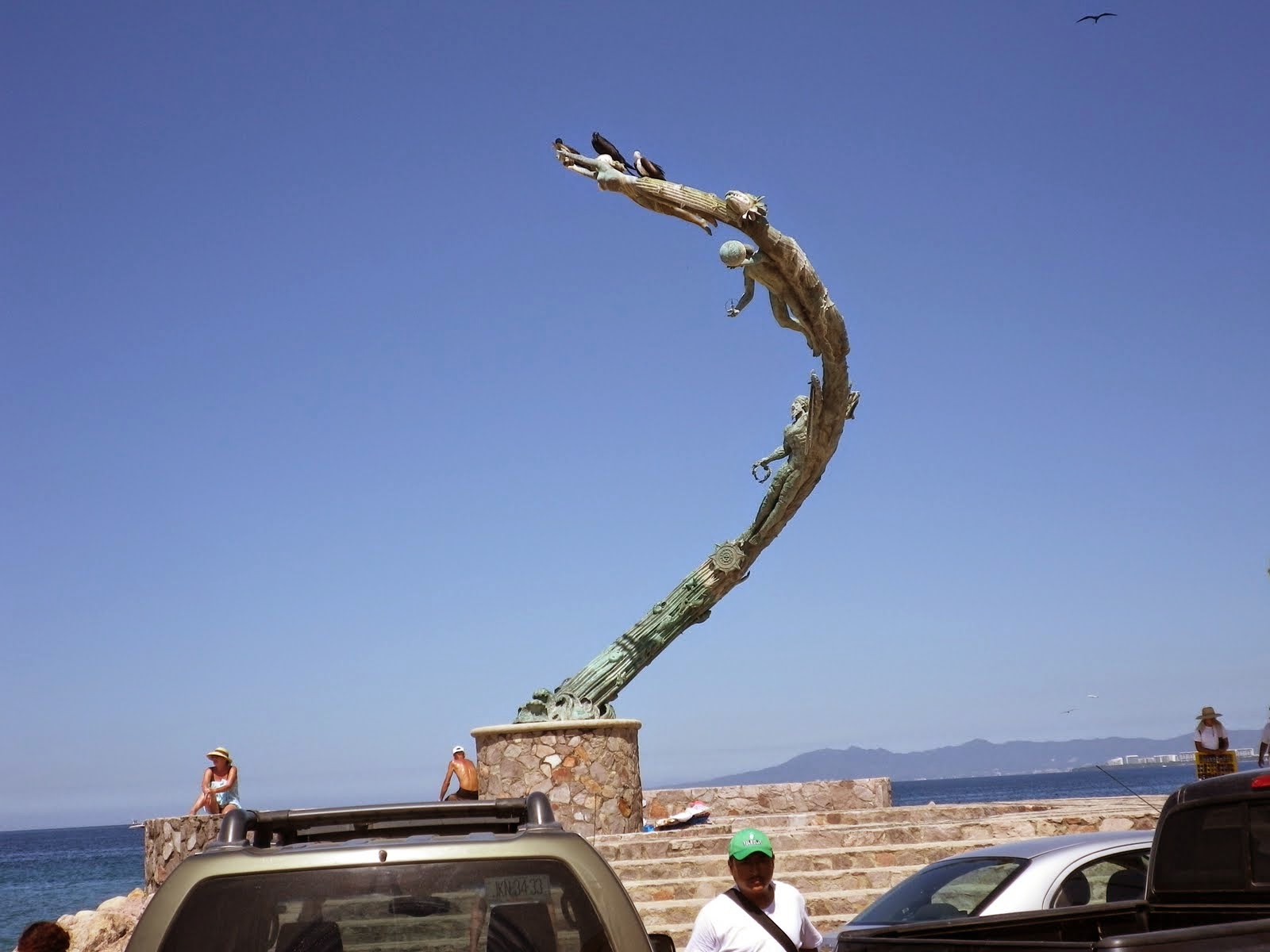 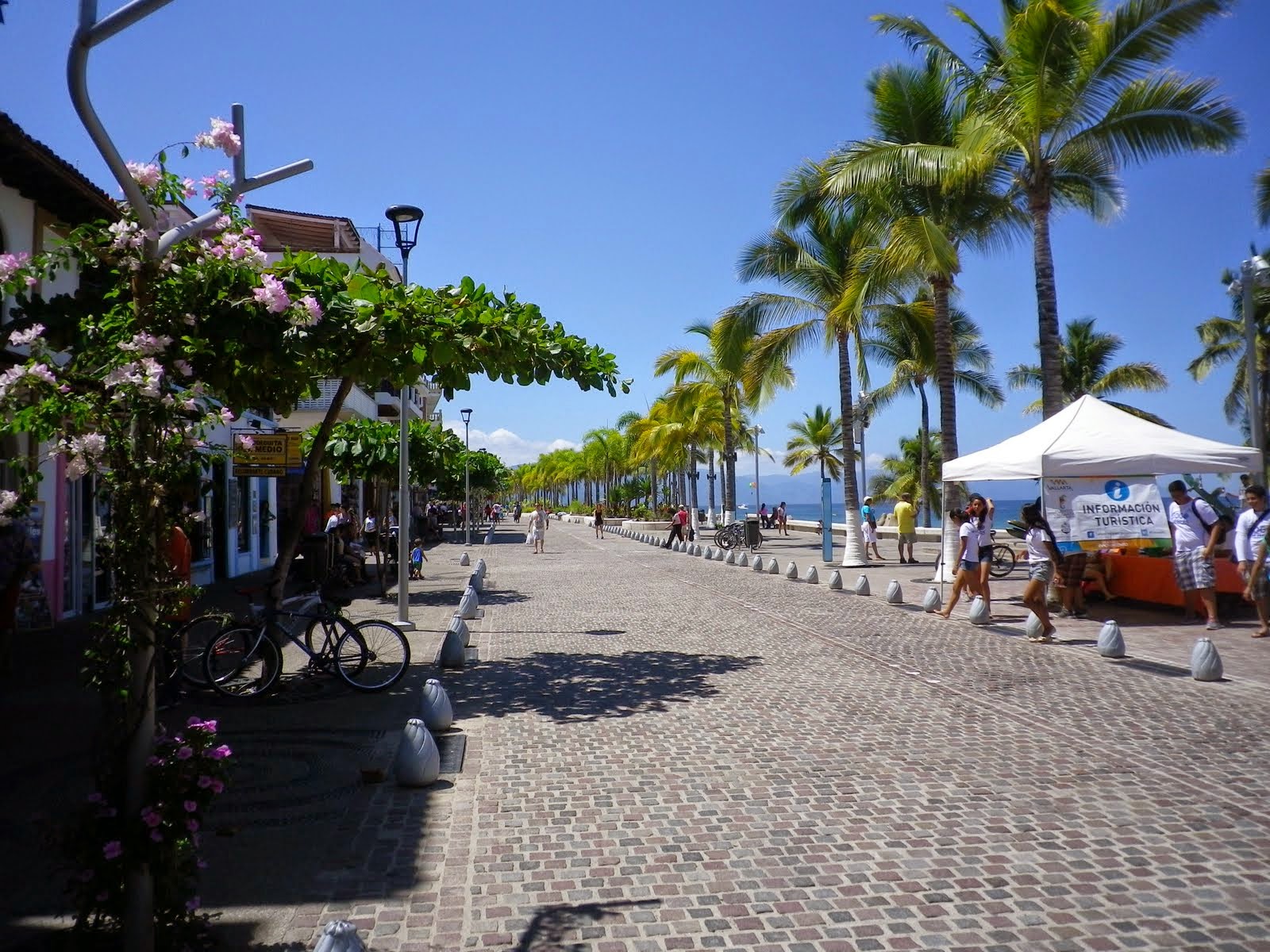 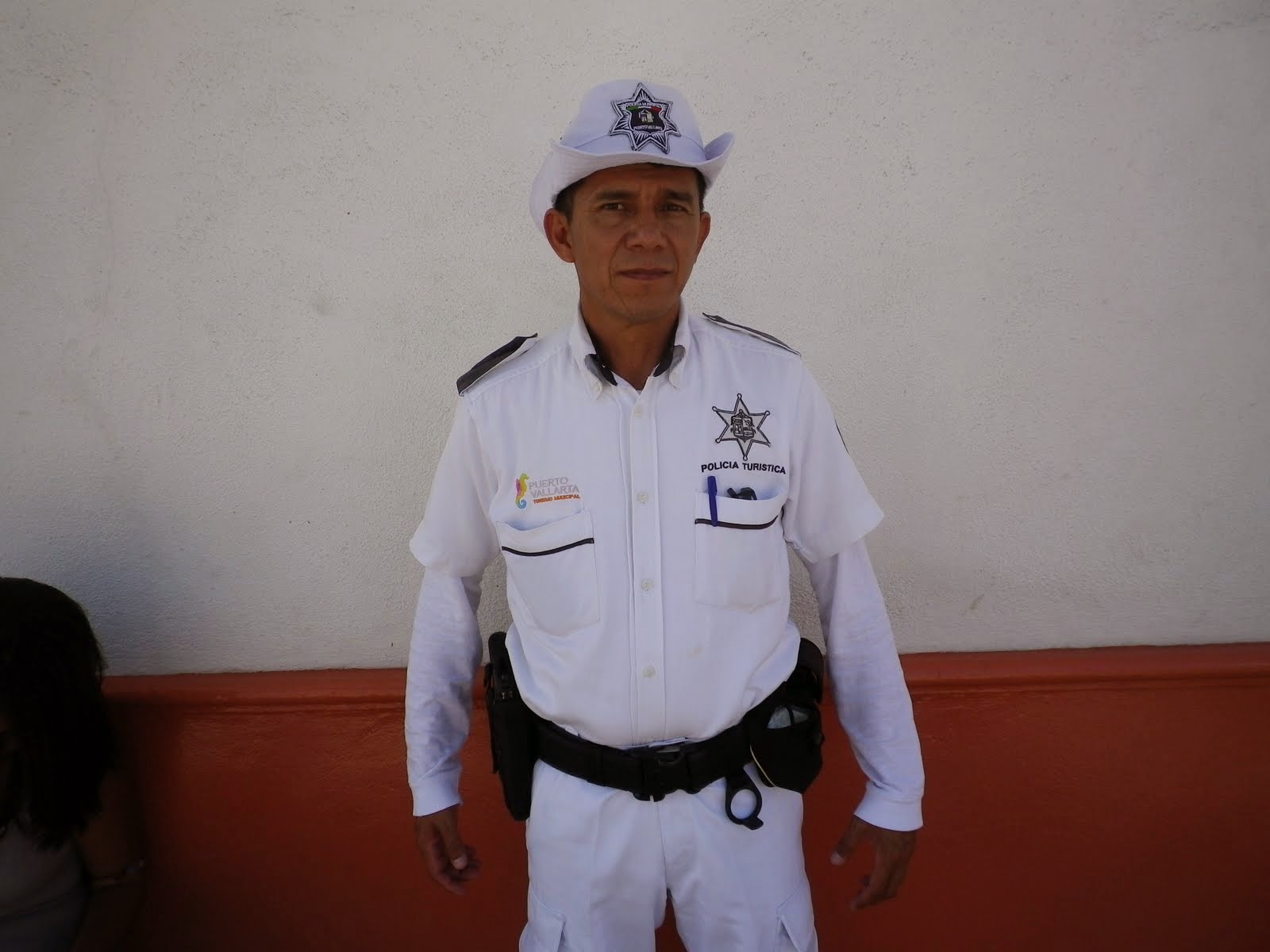 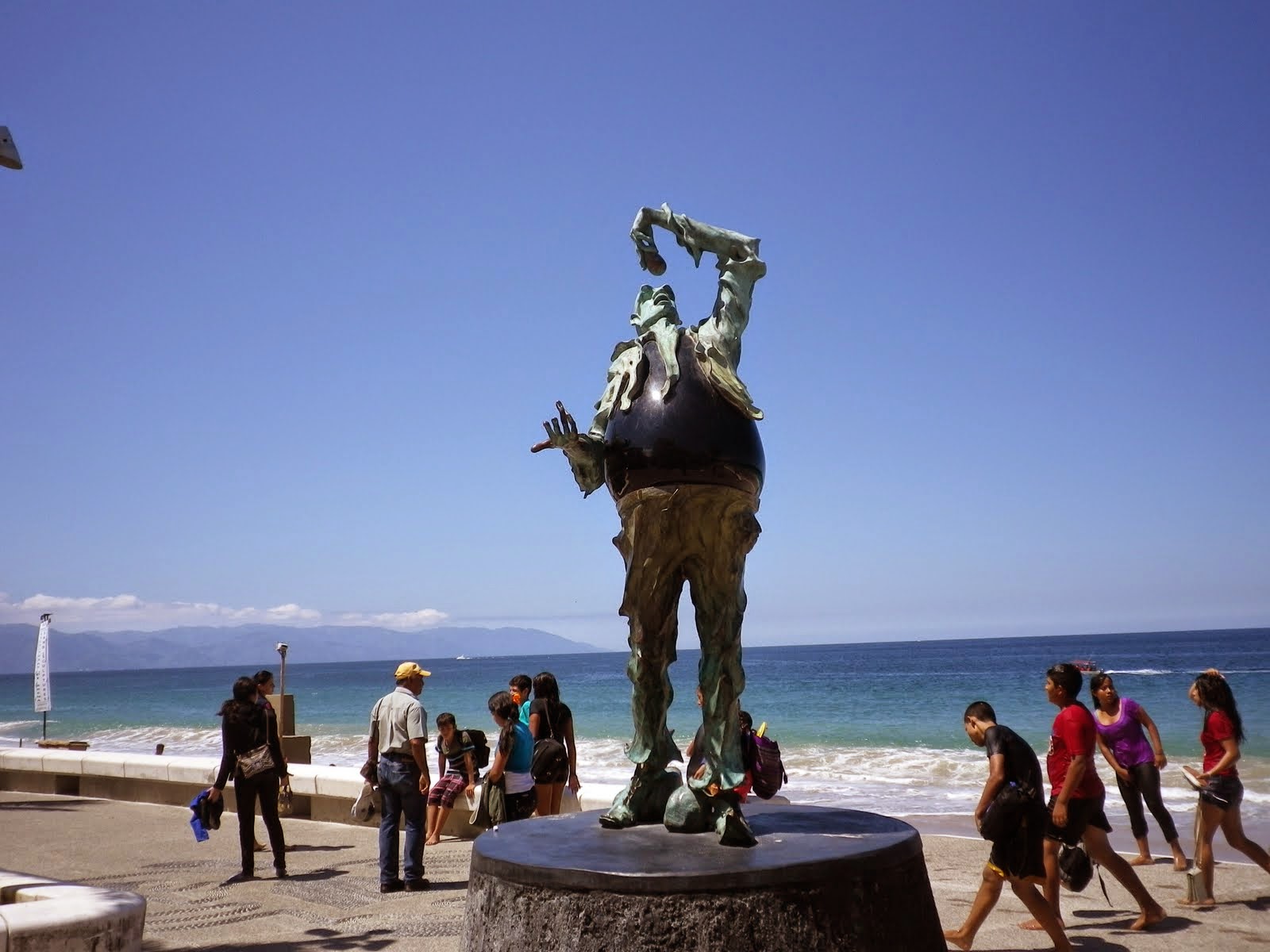 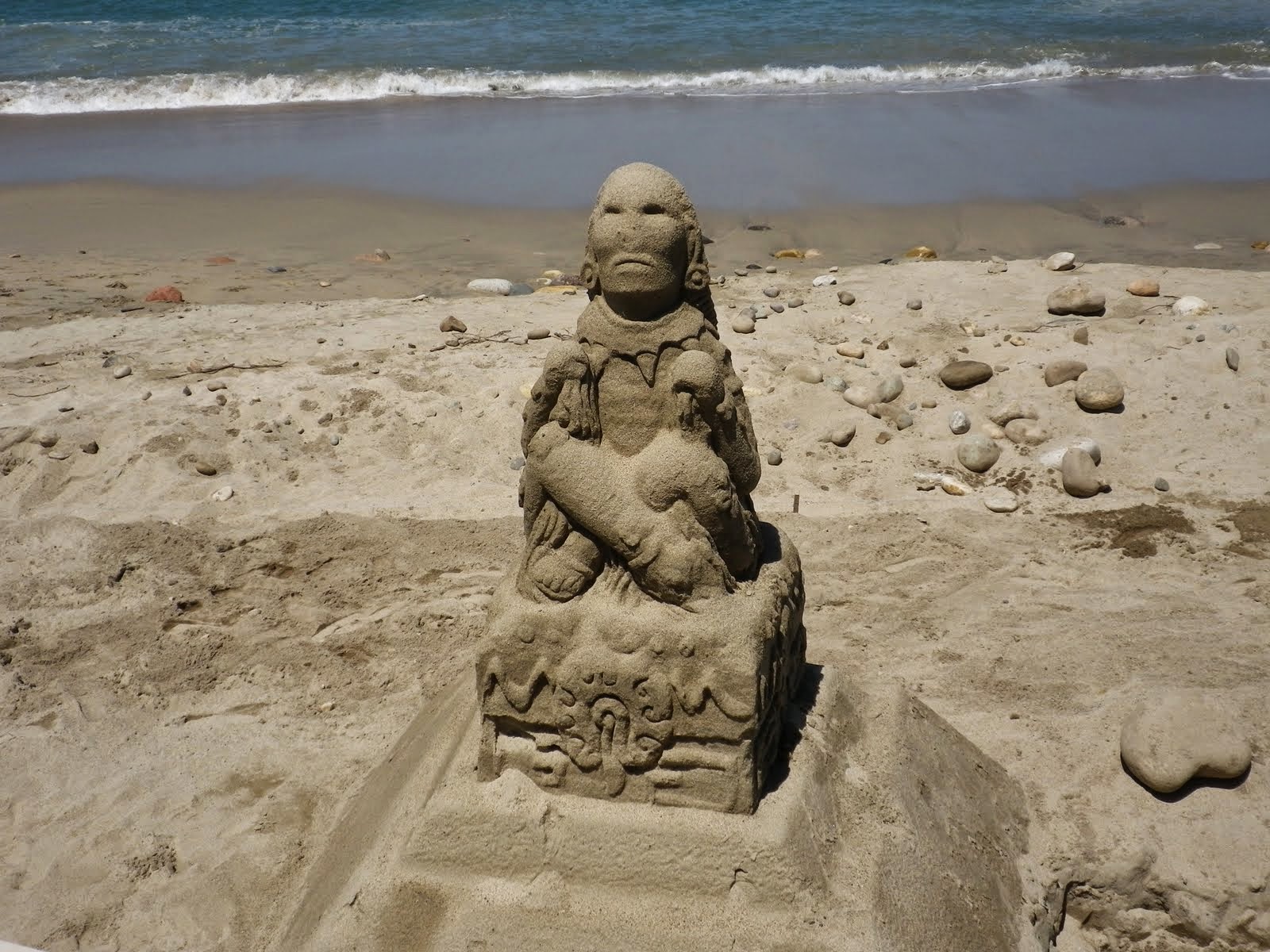 We then visited Our Lady of Guadalupe Parish. We went there at noon time and there was a mid day mass going on. It was all in Spanish and we did not understand a thing. Nuestra Señora de Guadalupe Parish is the symbol of the city. It is a very popular church in Mexico. Since there are too many tourists visiting, the brochure says “don’t forget to be respectful”. While there, we were very respectful. Did not even click our camera during the mass. Donated some money when the plates were passed. 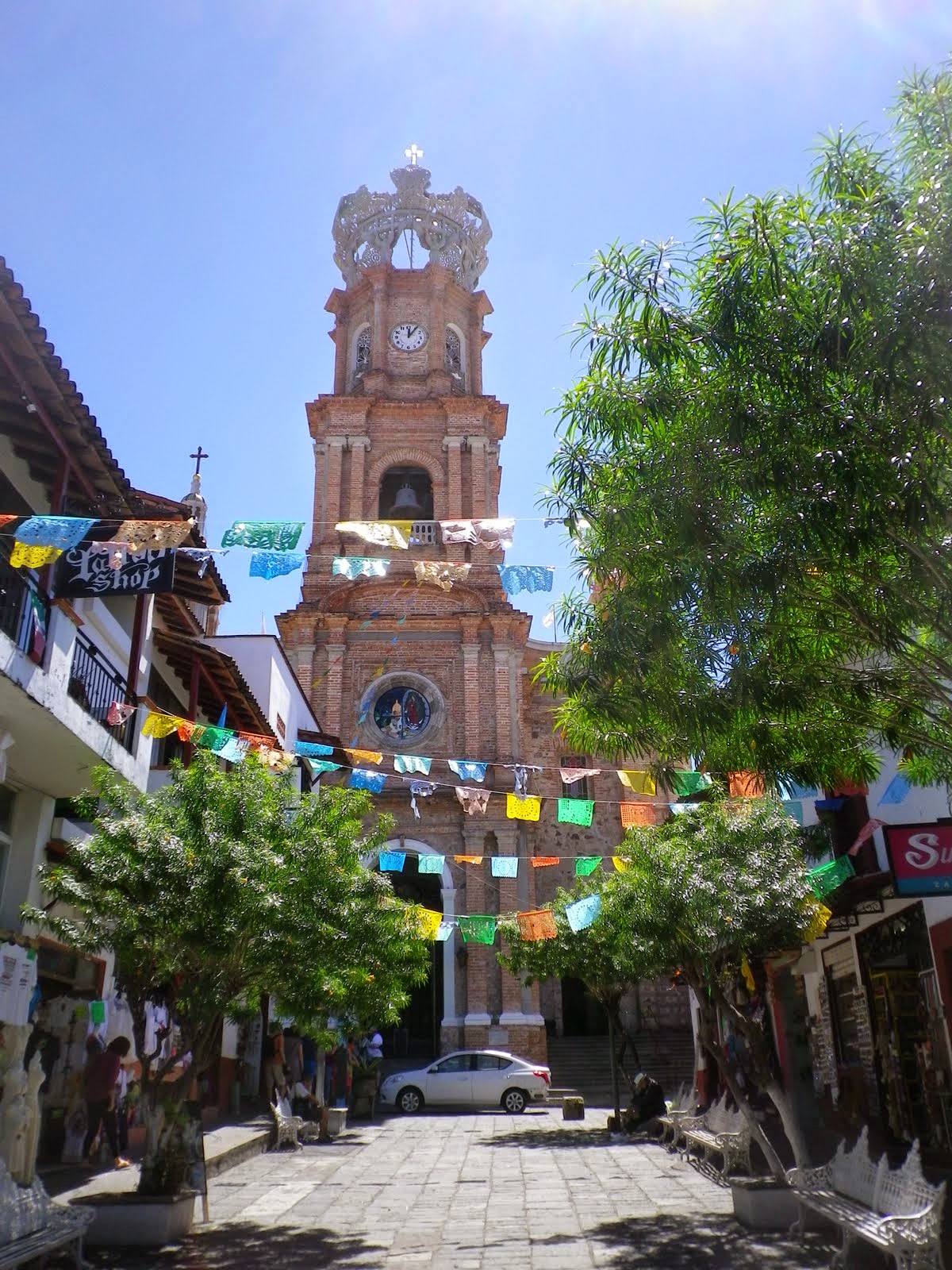 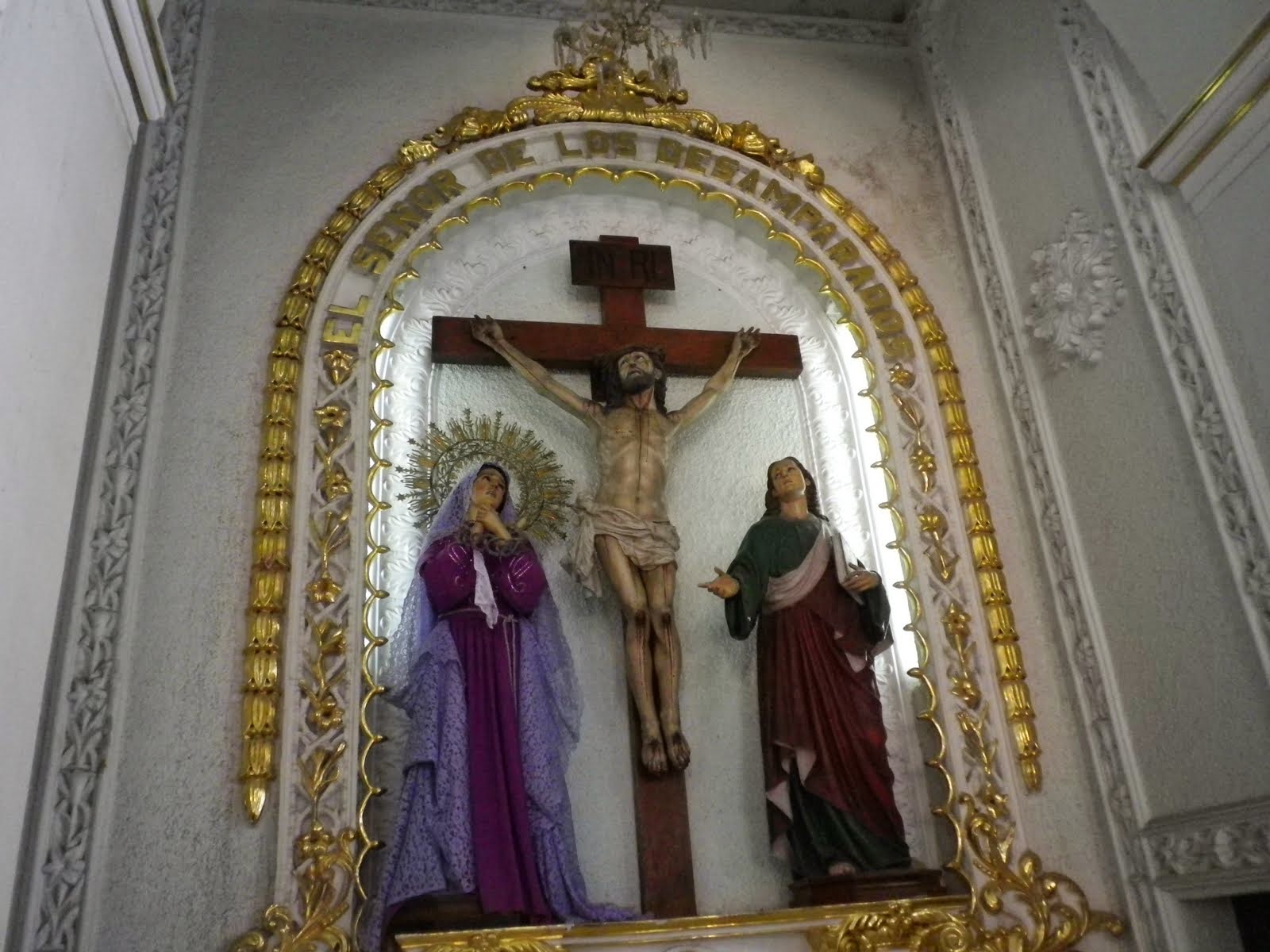 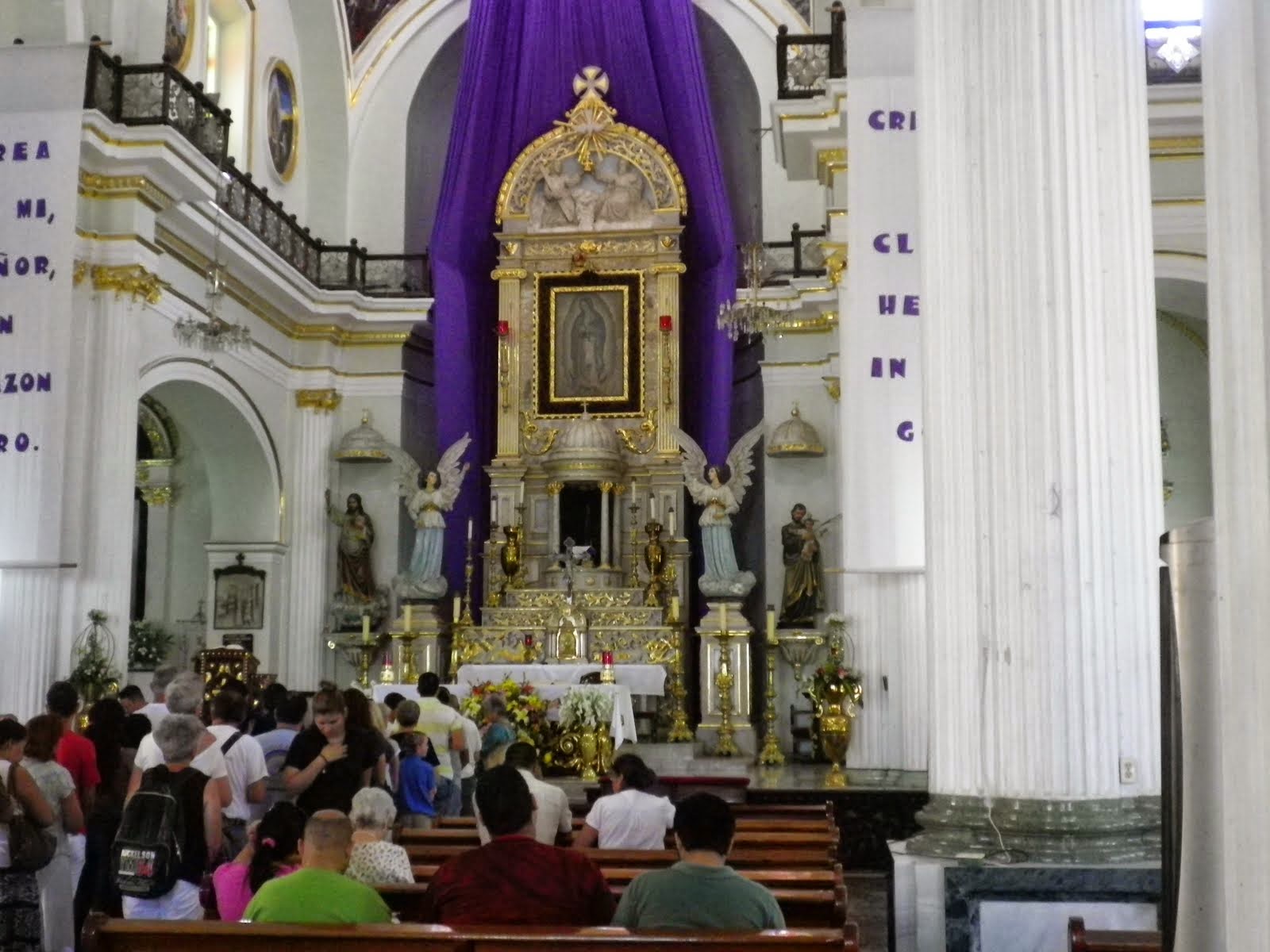 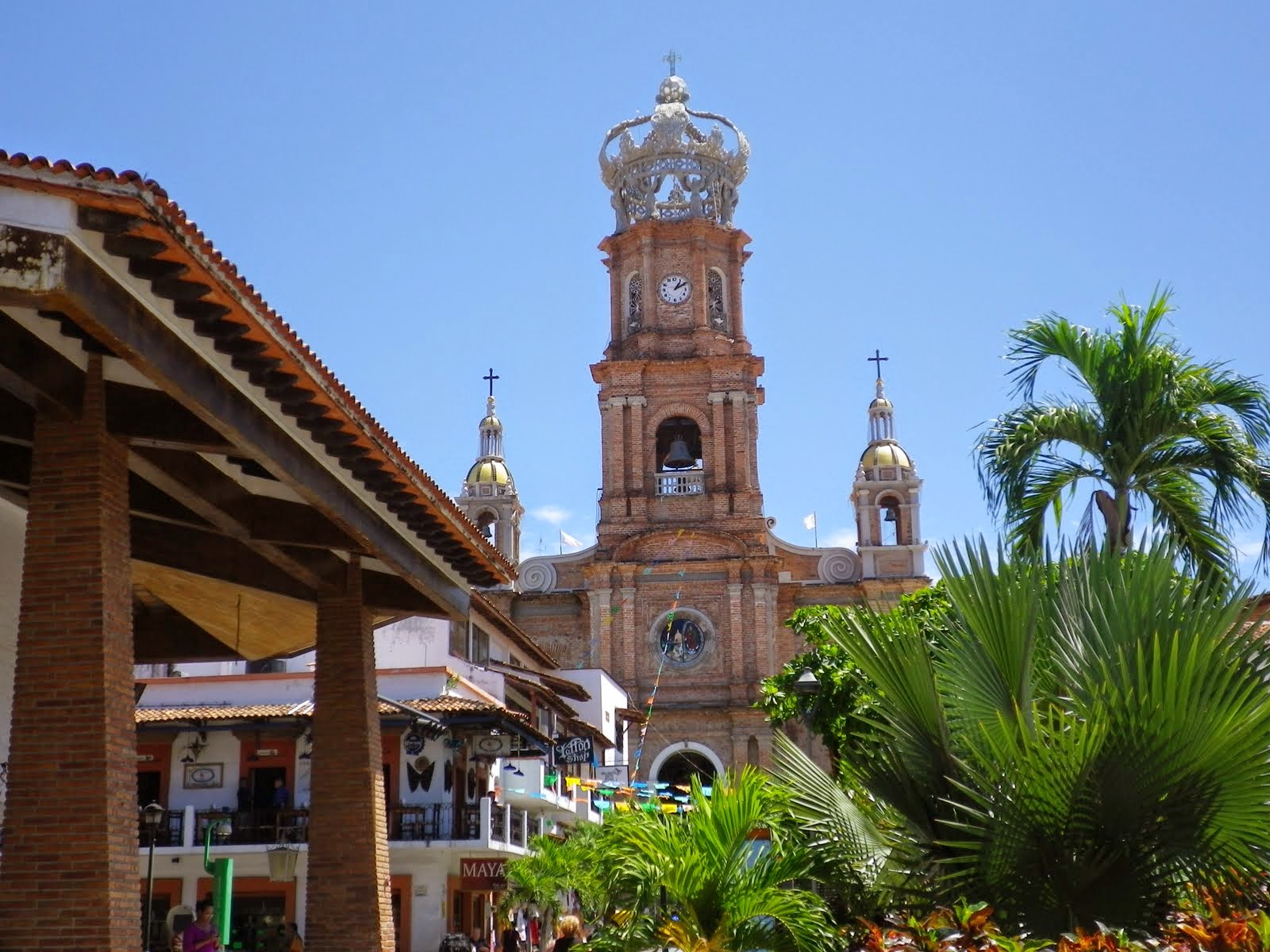 Romantic Zone is the Old Puerto Vallarta City (ala Old Delhi and New Delhi).This is the busiest part of town. The streets are smaller, there are more shops, cafes, bars and restaurants per square foot than anywhere else in town.

Here are a few photos. 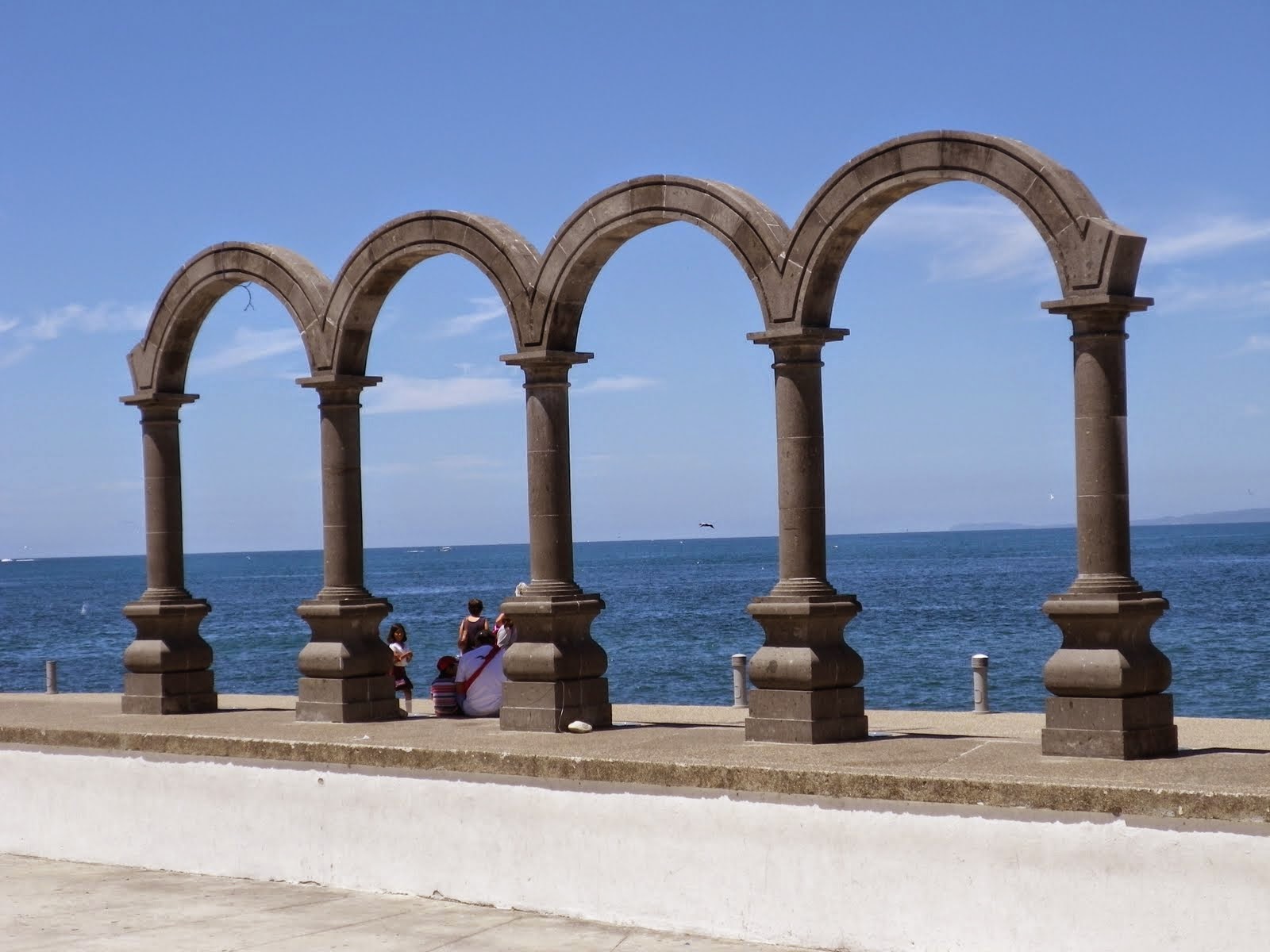 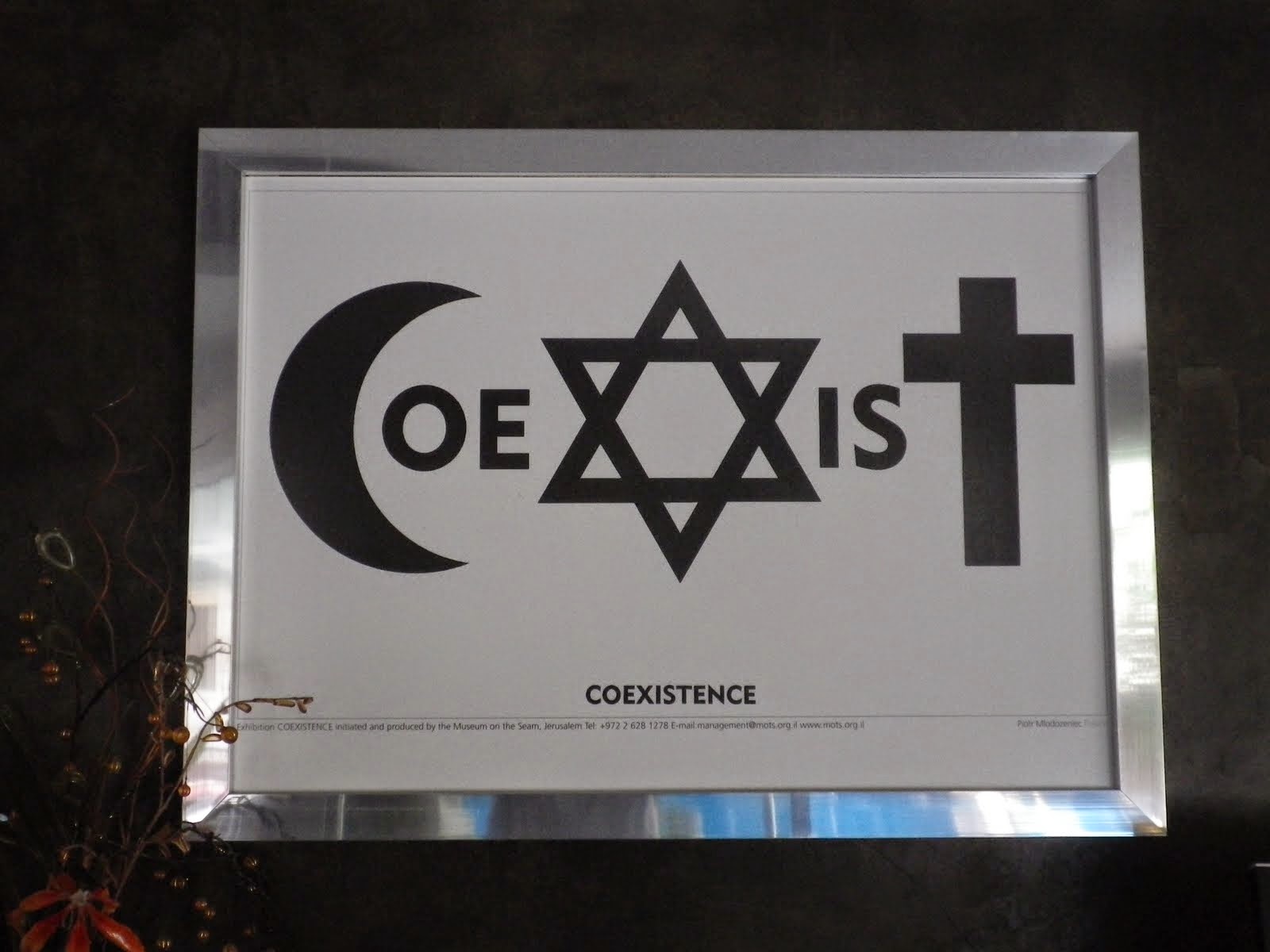 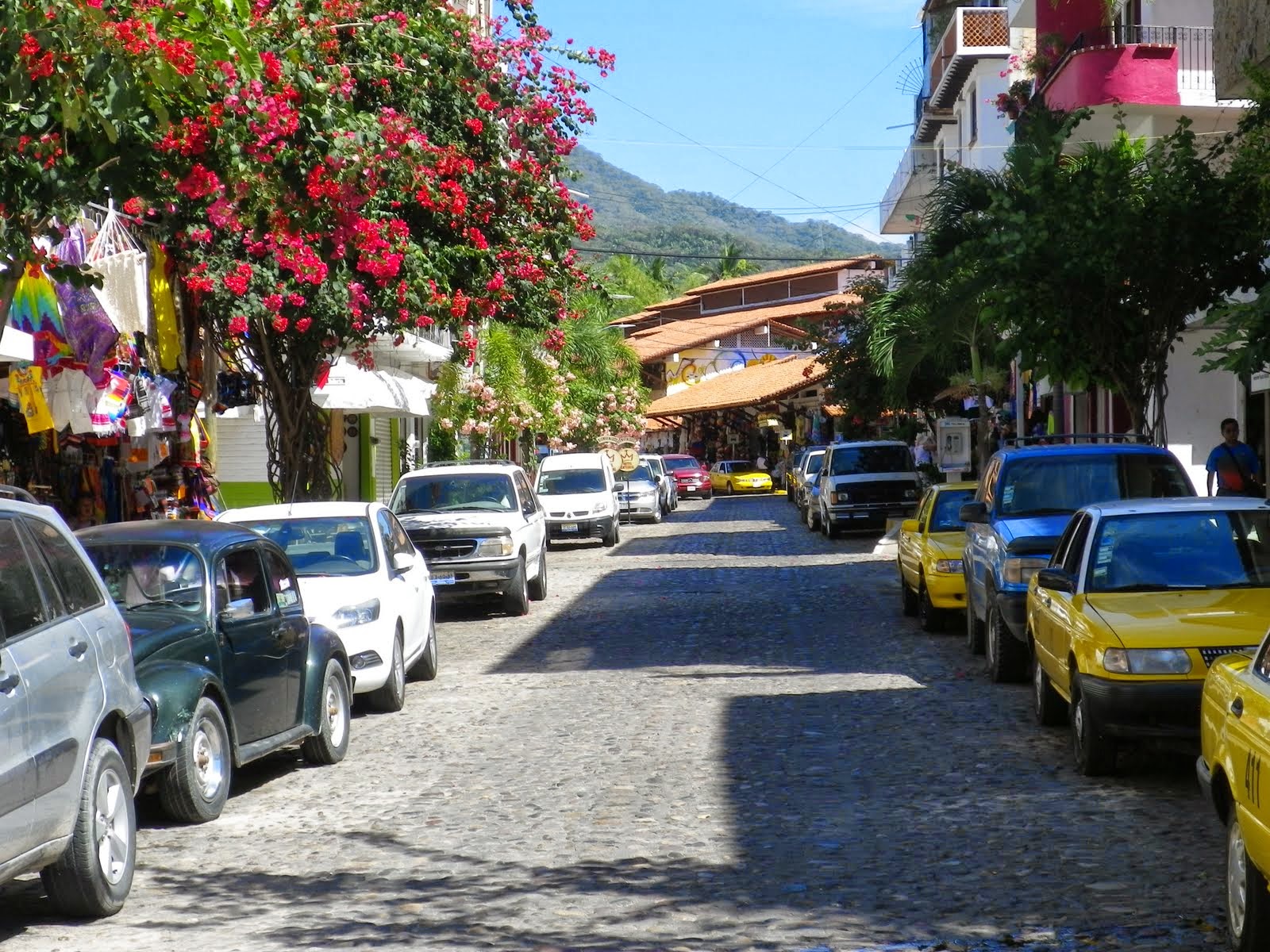 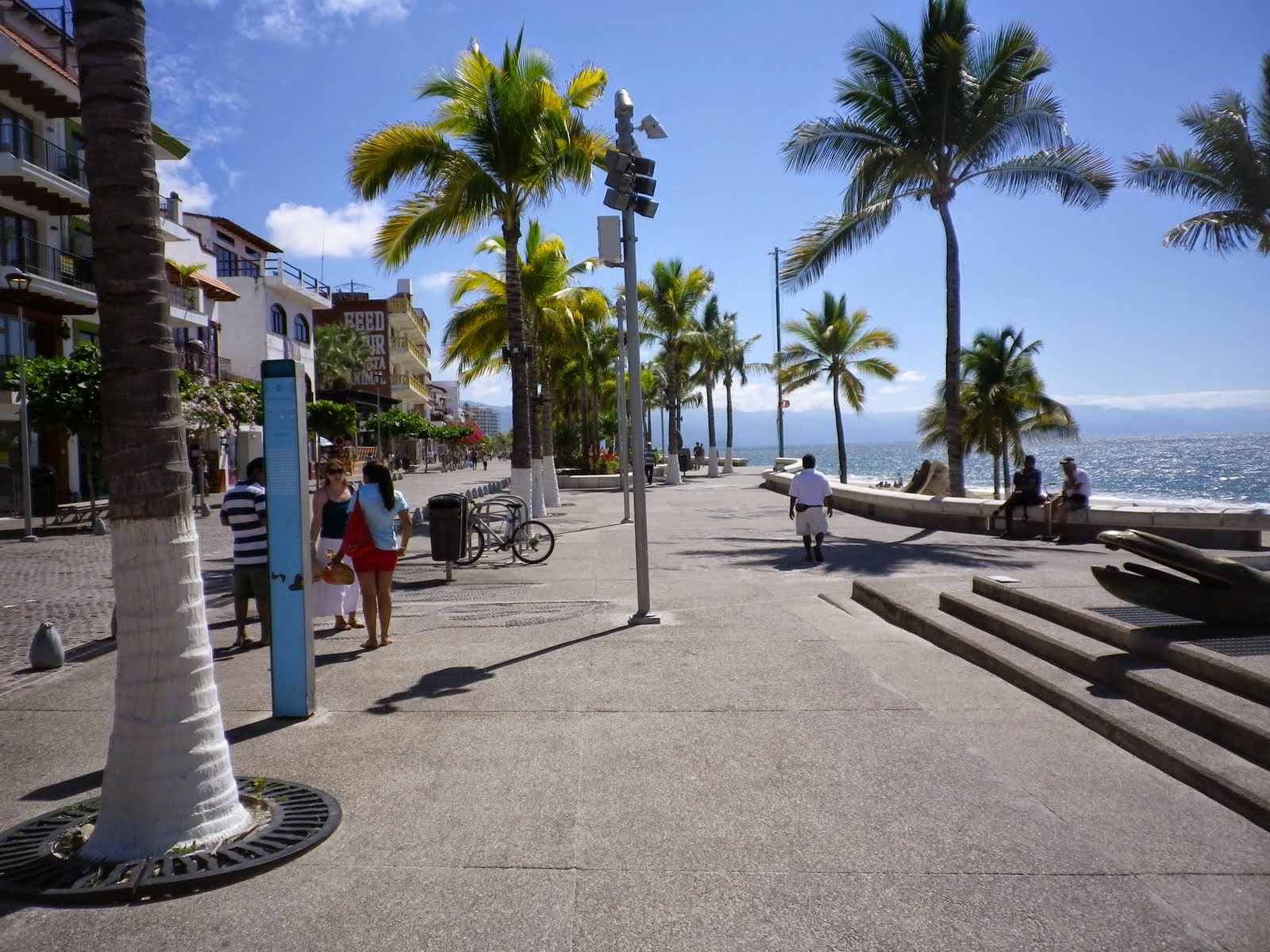 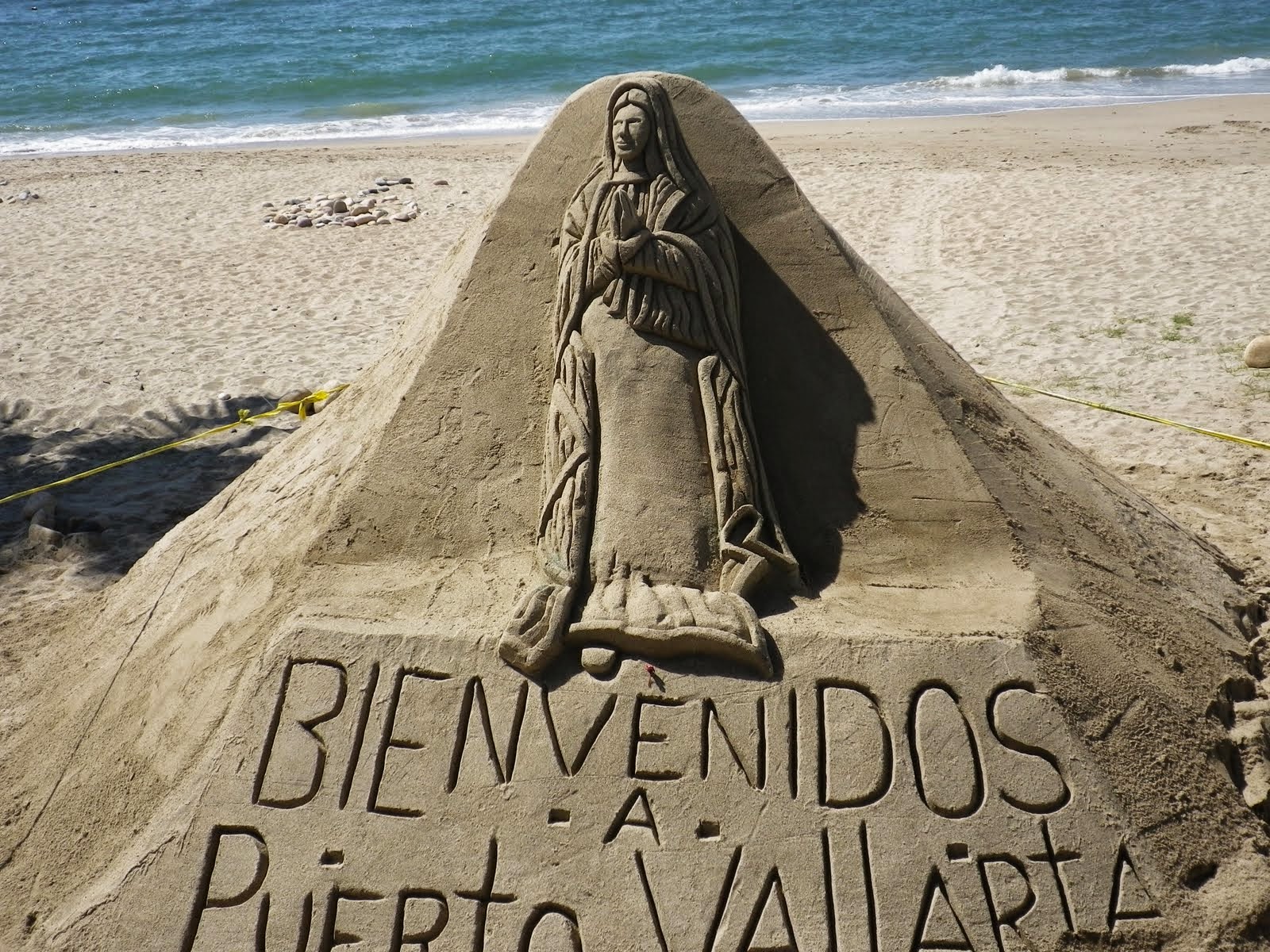