A Page From the Past

This happened a few years ago. Even now, when I and LG (my wife) recall this incident, we laugh and laugh.

Her brother and his wife were visiting from India. Our ironing board started to give trouble. LG wanted me to buy a new one before their arrival. We all know I am the laziest person in the world. And before I could buy a new ironing board, they have arrived from India.

LG is a worrying type. Her visiting sister-in-law is used to making rude remarks. That does not bother me a bit. But it bothers LG a lot. LG was worried that the visiting lady would give some caustic remarks about our not keeping a working ironing board and how everything is “perfect” in her home in India, etc etc. You get the drift

The day after their arrival, I got a call from LG while I was in my office. She requested me to buy an ironing board before I come home, unpack it, and put it in the garage so that it will look like the ironing board has been there in working condition all the time. This should be done secretly without the visitors’ knowledge.

I took my afternoon off and drove home. On the way I stopped by a departmental store near our home to buy a new ironing board. While the sales clerk was explaining the difference between various brands of ironing boards and their prices, I heard a few Tamil voices from the next isle. After a few seconds, I realized it was my wife’s voice and her brother and his wife’s voices.

I was supposed to buy this without their knowledge. So, at that given moment, I did not know what to do. While the sales clerk was continuing his sales pitch, I started to leave. The sales clerk was surprised. The following conversation took place.

Why are you leaving Sir? You did not like any of these ironing boards?

I like them. I will come back later. Right now I have to leave urgently.

(If you want to lie, you should plan ahead. This was an impromptu incident.)

I heard my wife’s voice in the next aisle. She is with someone.

Sir, you don’t have to runaway because your wife is with someone. If she and that guy see you, they should be the ones running away from you.

Before he could finish, I was out of there.

Later I came to know LG drove the visitors to this departmental store without knowing I would also be there. Any how, I came back after 20 minutes and bought the ironing board. Unpacked it and put it in the garage. LG was happy. I told her the incident in the departmental store a few hours later. Even now, when we recall this incident, we laugh and laugh.

Quite a few world political leaders, when shaking hands, use both hands. Some shake with both hands. Some others shake with one hand and the other hand touches the elbow or shoulder of the person they are greeting. People who greet like this are considered (rightly or wrongly) “born leaders”. In USA, whoever wants to become a “born leader” practice this habit. Hahaha.  A few sample pics: 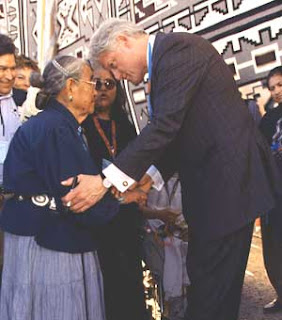 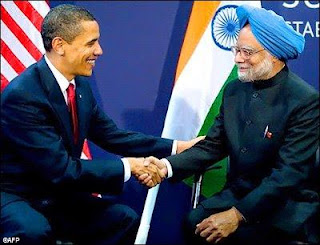 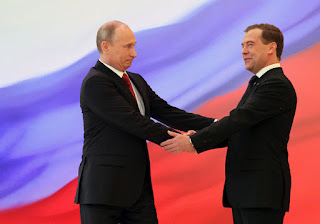 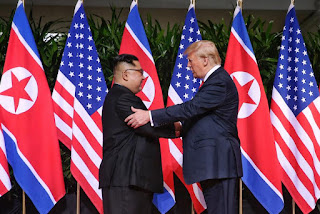 We lived in Salt Lake City, Utah, for 6 years. My company transferred me there.  How did I end up there?   One day my boss called me in his office and said:

“You have been in a ‘staff assignment’ for too long. I want you to go for a ‘line assignment’. I am going to transfer you as of next Monday. Do you want to work in Los Angeles or Salt Lake City?”  I asked him to give me 24 hours time. I discussed with my wife and kids and decided to go to Salt Lake City rather than Los Angeles.

I made the right decision.  Salt Lake City is a famous holy city in the USA.

Like Vatican for Roman Catholics, like Varanasi for Hindus, Salt Lake City is for Mormons. They consider themselves Christians. Their church is called The Church of Jesus Christ of Later-Day Saints, commonly known as the Mormon Church. It is also known as the LDS Temple. However, the Catholics and Protestants do not consider them as Christians.

Their living style is slightly different from others. Let me write about some of their religious lifestyle choices:

After the 18th birthday, everyone should serve the Temple for 2 years on a mission. The church will send them all over the world to represent their religion. They are called missionaries. This is mainly for the males. Females are encouraged to marry young, if not then go on a mission.

10% of their earnings (via income or otherwise) must go to the Temple every month as a donation. It is called tithing.

In the early days of the Mormon Church (1830 AD), the elders (Church leaders) encouraged polygamy. Even though it is not practiced now, some people secretly still practice this. However, most Mormon families have lots of kids. 6 children in a family is very common in this day and age.

They do not drink alcohol, coffee, tea, or soda.

They have to volunteer their services to the Church – just a few hours every week. Mormons must spend time with their family every Monday evening. This is called Family Night.

Many highly educated Mormons want to live and die in Salt Lake City. Therefore, they are even prepared to accept lower salaries to stay in SLC as opposed to leaving for bright lights of New York, Los Angeles, or San Francisco.

Quite a few of the Americans consider Mormons as “weird”. However we had a great time in Salt Lake City. We enjoyed our stay, made a lot of friends and it’s a great place to raise kids.

FYI: In the forth coming US Presidential Election, the Republican Party candidate who is going to oppose President Obama is Mr. Mitt Romney. He is a Mormon. Mr. Romney is the first Mormon ever to be nominated as a Presidential candidate by either party. Will majority of the Americans vote for him? According to Gallup poll, 22% of the Americans are hesitant to support a Mormon in 2012.  Will he win?  I will let you know on the night of November 6, 2012. 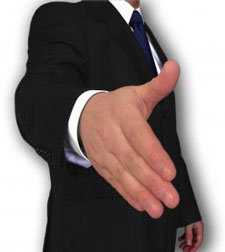 
When you meet a stranger and want to start a conversation what do you do first. Introduce yourself. How do you do that?

Start the conversation with a casual greeting.

State your name. (If it is a work related meeting add your title with a firm handshake).

Listen carefully to the response from the other person.

Simple? Not so simple. Quite a few people, when starting a conversation, forget to state their names and start a conversation on a subject that is important to them. That immediately puts off the other person. He/She would just smile and move away.

A funny incident happened with me while we were living in Salt Lake City. My wife had to undergo an operation. She was in the operating room. I was sitting, reading a magazine, in the relative’s waiting room. There were about 25 people in that room.

A gentleman, wearing just a t-shirt and pant, sat next to me. Nice respectful appearance. I looked at him. He smiled. The following conversation took place.

Someone is undergoing operation today?

Who is the surgeon?

What kind of operation she is undergoing today?

I looked at him. He was smiling. I stood up, stared at him, and said the following words in a much louder voice so that everyone can hear in that room.

“That is none of your fxxxing business.”

The guy was so ashamed and embarrassed. He said:

“I am sorry. I should have introduced myself at first. My mistake. I am “so and so” and I am the Director of Patient Services for this hospital. If you tell me the name of the surgeon and why the patient is being operated upon, I can call the surgeon in the operating room and ask him about the progress. I can then let you know what is happening in the operating room and the progress they have made. That is my job in this hospital”.

What then? I told him I am sorry for blurting out bad word. He then immediately called the surgeon in the operating room and got the information. Everything ended well.

He repeatedly apologized for not introducing himself at the beginning.

We all receive many annoying and unwanted calls. From telemarketers. From people who do surveys. From scam artists. From fund raisers. From credit companies to give us their cards. From banks to give us loans.

I have used some funny tricks. I will ask them if they can hold for a few seconds. Put the phone down. Don’t pick it up for 3 minutes. They are gone by then.

Sometimes, I would reply in Tamil as if I don’t know English. That used to work perfectly until many of these centers moved to India. Nowadays if I reply in Tamil, and if the call is from India, they bring a Tamil speaking guy or girl to talk to me. Ahaaaa. But they are no match for me. If a guy talks to me in Tamil, I will answer like this:

Recently had a strange but pleasant experience. I got a call (not from an Indian center) when we were about to go for a movie. The caller said she is doing a survey and want me to answer a few questions. I told her to get lost and not to waste my time. I then hung up. I thought that was the end of the story.

But no. A week later I received a letter. Picture of that letter with its attachment is posted here. 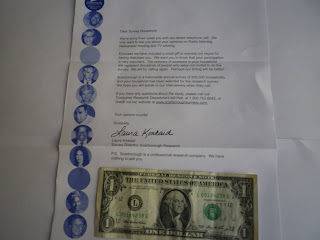 Since you cannot read from the above picture, I will type a few important sentences from this letter.


We’re sorry if we upset you with our recent telephone call. We only want to ask you about your opinion on Radio listening. Enclosed we have included a small gift to express our regret for having disturbed you. We want you to know your participation is very important. We will try calling again. Your opinion counts.

The letter came with a one dollar bill (gift).

I was pleasantly surprised. Will certainly respond to their survey next time they call. Not for their one dollar bill. Impressed with their unique tactic. We all would make a few dollars if every telemarketer follows this tactic.
Posted by SG at 1:33 PM 19 comments: