This weekend, we were invited to watch a practice session of a Water Polo team.  The players were kids, 5 to 10 year olds.  Since they were so young, it was co-ed, both boys and girls.  About 50 kids and about 150 spectators – parents, siblings, relatives, friends.
One girl was crying loud.  She was about 9 years old.   She was not just weeping silently.  She did not want to go in the pool and practice.  For some reason, she hated water polo.  Her mom and dad were persuading her to go into the pool.  Her only answer? Cry Cry Cry.
The mom lost patience.  She ordered the child to go in the pool and be in the water at a corner of the pool until the practice was over.  The girl entered the pool and hung in the water in a corner.  And, continued to cry.  When the practice was over, she got out of the pool and the family went home.  I am told this happened every week.
God knows how many verbal abuse and/or physical beatings that girl may be facing at home.  Now I realize why some young girls run away from home.
I do know that when parents admit their kids in an extra curricular activity, some kids will resist.  After 2 or 3 sessions, they will become fond of those activities.  But what should the parent do if the kid refuses to participate and start to cry every week?  Personally, I will not go to such extreme and pressure my kid.
It is ok for parents to push their kids a little to participate in some activity.  It is parents’ responsibility also.  Excessive pressure is not acceptable.  Some parents feel the achievement of their kids as their own achievement.
I thought only Indians pressure their kids.  Looks like it is all over the world.
What do you think?
Posted by SG at 10:17 PM 28 comments: 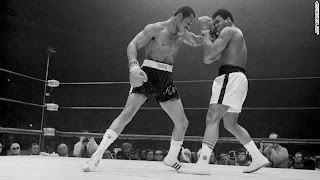 Ken Norton fought 3 times against Muhammad Ali.  Their first bout is memorable even today.  Ken was a 7 to 1 underdog.  Prohibitive favorite was Ali.  But Ken won on a decision.  However, in that fight what Ken did to Ali was never able to be done by any other boxer.  Ken Norton broke Muhammad Ali’s jaw.
The other 2 bouts, Ali won.
Ali defeated everyone mentally at first.  But he could not do that to Ken Norton.
They both respected each other off the ring.
May Ken Norton rest in peace.
PS: Those who think boxing is a cruel sport…..Please take it easy.  There are lot of people who enjoy boxing.
Posted by SG at 8:51 PM 19 comments:

Recently we received an invitation to an Indian wedding.  At the bottom of the invitation the following words were printed - “We request no boxed gifts, please”.
Excuse me?  What exactly does that mean?  I’ll give my humble opinion regarding that in just a moment.
Before we go into that topic let’s talk about wedding gifts in general. It used to be that invitations were just that – invitations. Gifts were never mentioned on the invitation.  That’s the way it should be, right?   Well, let’s think about that and some of its disadvantages.
If you don’t mention anything about gifts then newly married couples will end up with 14 popcorn makers, 6 electric rice cookers, and 4 toasters.  Oh by the way, none of those items are needed because the couple already has TWO of each item – thanks to the groom and bride having it from when they were single.
But I digress.
People of Indian origin who are getting married in the have started following the American custom of having a “Wedding Registry”.  The couple who are getting married will register with a department store or two and they will list all of the items they need after they get married.  The invitation will tell the guests where the couple has been registered.  The guests can then go to the store or website and buy the items they would like to give as a “gift” to the newly married couple.  The stores will deliver the gifts to the newly married couple on behalf of the guests.  After the wedding ceremony and honeymoon are over, the couple will write individual “thank you” notes to all of the guests.
There are advantages to having a Wedding Registry.  First, guests don’t have to worry about what to buy.  Everyone already knows what the couple wants by viewing the list of items at the store or online.  Also, you can select the items according to your budget.  Furthermore you don’t have to carry the gift with you to the wedding or do the dreaded gift-wrapping that takes you 15 minutes to complete but the bride and groom will rip it open in 4 seconds and won’t even remember what the wrapping paper looks like.
About 15 years ago, Wedding Registry was considered rude.  It also took the fun and surprise out of gift giving.  Being registered was like begging for a gift and saying “Hey Mr. and Mrs. Guest, buy me this and buy me that.” Tacky!  Nowadays though, it is widely accepted by everyone including the Indian social circles in the .
So in my life I have received wedding invitations from Indians and non-Indians. Regarding gifts, I have seen the following (or some variation of it) on the invite:
Invitations that do not mention a gift at all.
Invitations that said: “No gifts, please.”
Invitations requesting that guests please donate to a particular charity as opposed to buying a gift for the event.
Invitations that said: “Your presence is the only present we desire.”
Now let’s get back to what I originally asked, because this is the first time I received an invitation that said “No Boxed Gifts, Please.”  Again, what exactly does that mean?
Come on now, we all know what it means. It means “Bring us a gift but make sure that it’s a CASH gift.  You see only CASH is accepted at this wedding.  Keep your stupid boxes at home.”
I may be old fashioned on this one but in my opinion, asking for a gift is not really decent, even if everyone else is doing it.  Add to that, you are now outright asking for CASH?  I didn’t know that I was attending the wedding of 2 beggars. Why don’t you just sit outside the wedding hall and panhandle all the people walking by for some spare change.  Why don’t you just say that there is a minimum admission charge of $25 but no maximum.  It’s tacky, lacks decency, and certainly classless.
You know I may have given a CASH gift or I may have not.  It was a choice that I had to make but the invite isn’t giving me a choice.  Now don’t be afraid to disagree with me.   If you think I’m wrong or I’m taking it the wrong way, go ahead and say something now.  Because I’m a “literal meaning” kind of guy.
The words said “No Boxed Gifts, Please” right?  So I’m thinking about buying a gift and instead of putting it in a beautiful gift box, I’ll just give it in a plastic bag to the newly married couple.  Or maybe I just have too much class for that.
Posted by SG at 8:19 PM 20 comments:

I saw and heard Zubin Mehta’s concert on the banks of in You Tube.

I am not going into the controversies surrounding this concert. I am not qualified to review this maestro. The following are my observations only.
The whole concert was mesmerizing. Flawless. (This is not a review. Just an observation.)  I heard it was broadcast "live" in India.  This is for those who did not watch. Please watch the whole concert. If you don’t have time to watch the whole concert, at least watch his Beethoven’s 5th Symphony (starts at 1:05:54).
3 people spoke. German Ambassador Michael Steiner, Chief Minister Omar Abdullah. and Zubin Mehta. All 3 carefully avoided saying the word “India”.
Zubin Mehta has been living in foreign countries for the past 50 years. He still does not have the fake American accent. I was impressed. Have seen lot of FOBs (Fresh Off the Boat) use fake “AAZH” to pronounce “R”.
The audience looked like a VIP crowd and no ordinary folks.
German Ambassador’s wife was the only one enjoying the concert.
Everybody else was bored. Yawning. Talking to each other. Looked like they cannot wait to get out of that place. At the end of each performance, most of them were not even clapping their hands.
One lady was even sound asleep.
Posted by SG at 11:14 AM 24 comments: