One of the Biggest BS

Venkat and Sakthi loved each other. Due to some unfortunate circumstances they could not marry each other. Venkat marries Kanchana. Sakthi marries Nakulan. Kanchana and her family and Nakulan and his family know about the past love affair between Venkat and Sakthi.

After the marriage, Venkat and Sakthi secretly meet very often and that too in shady locations. At one time, they booked a room in a lodge and met there. A bad guy takes pictures of both of them together and sends via cell phone to every one.

Nakulan and his family ask Sakthi several times as to what is happening. She says there is nothing going on between her and Venkat and she will tell the reason for those meetings at a later suitable time. One day Nakulan visits Sakthi in her office and she was not at work. Gone to see Venkat. Nakulan’s family pleaded with Sakthi to tell them what is happening. Sakthi refused to tell. So they threw her out of the house in the middle of the night.

Sakthi’s mother is crying day and night that her daughter’s life is doomed. Sakthi’s mother goes to Nakulan’s house asking for a pardon for her daughter. Nakulan grabs her by the neck and throw her out of the house. Sakthi came to know this. But still will not tell anyone why she is secretly meeting her ex-lover Venkat.

Another day Nakulan visited his wife Sakthi in the office. There he saw Sakthi and Venkat in a cozy conversation in a private room. Nakulan goes there and asks both of them what is happening. They both said nothing is happening and they will tell when the time comes. Then Nakulan manhandled Venkat and others have to come and break the fight. Nakulan is getting ready to send a divorce notice to Sakthi.

Finally the answer came. Venkat and Sakthi were arranging for Venkat’s sister’s wedding. The sister ran away from home with her boy friend. Venkat and Sakthi “promised” her they won’t tell any one until the marriage ceremony is over.

My foot. One of the biggest BS. The above is from a TV serial. The director thinks the audiences are idiots. May be we are. Otherwise, why are we watching these serials. 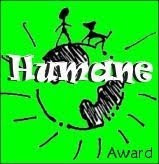 I will pass this award to the following 5 bloggers:

to everyone who want to have it, so you are requested to :
1. Accept and post the award on your blog.
2. Link to the person from whom you received it.
3. Pass the award to 5 other blogs that are worthy of this acknowledgment.
4. Let them know they’ve been