(I will write some posts regarding my vacation beginning this coming Wednesday. In my opinion, today's post is more important than my vacation posts.) 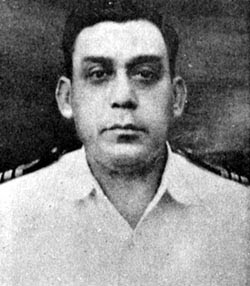 Today is Captain Mahendra Nath Mulla’s birthday. He was born on May 15, 1926 in Gorakhpur in Uttar Pradesh. If he was alive today, he would be celebrating his 84th birthday.

He was commissioned in the Indian Navy in 1948. During the 1971 Indo-Pakistan War (or as someone might call “Bangladesh Liberation War”) he was Commander of INS Khukri. The ship had 18 officers and 176 sailors. His responsibility was to locate and destroy a Pakistani submarine in the Arabian Sea. On the December 9, 1971 night, INS Khukri was hit by torpedoes fired by a Pakistani submarine and sank.

Captain Mulla was calm and quiet. He asked his crew to abandon the ship. He organized the evacuation of the ship’s crew in an orderly manner. There was no confusion and no panic due to the Captain's calm transmitting itself to his men.
All the crew members were evacuated from the ship.

Finally his turn to leave the ship. There is an old tradition. Captains don’t abandon their ships. The ship was about to fully go under the water. The evacuated crew begged and cried for him to abandon the ship. He smiled at them. But refused to abandon his ship. He waved at them. Lighted a cigarette. Took a chair and sat on the ship’s bridge. Within a few minutes, Captain Mulla is gone under the water along with his ship, INS Khukri.

His action and behavior and the example he set have been in keeping with highest tradition of the Indian Military.

He was awarded Maha Vir Chakra posthumously for displaying conspicuous gallantry and dedication to duty.