We left London on June 16 and went to Venice, Italy. It is a 2 hour flight from London to Venice (courtesy of British Midland Airways). Whenever we travel on Indian Airlines or Air India we complain about the service. Once you travel on British Midland, you will never complain again about Indian Airlines or Air India because we have a new bottom feeder in the airline industry. On board the BMI flight, you better have your money ready at all times as you will need to pay even for a cup of water.

Venice is located along the Adriatic Sea in Northern Italy. It is best known for being a city built on water. It is famous for its canals and gondolas. The main transportation is motorized water buses. There are also water taxis available in Venice. 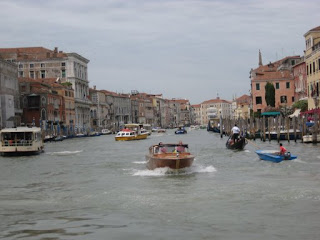 There are several attractions in Venice. Since we stayed here for only 2 days, we were able to visit the following; St. Mark’s Square, St. Mark’s Basilica, Doge’s Palace, St. Mark’s Campanile, Museo Correr, and of course we went on a gondola ride.

St. Mark’s Square is known as Piazza San Marco in Italian. It is very popular with tourists…as well as pigeons. It is the main gathering place in Venice and was built in the 9th century. 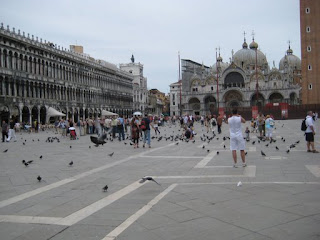 St. Mark’s Basilica is the main Cathedral in Venice. Even though it originated in 828 AD, based on Byzantine architecture, much of what we see today was constructed in the 11th century. 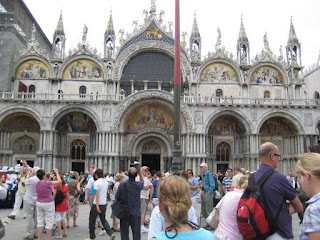 Doge’s palace was the residence of the Doge of Venice. Doge is an Italian title, roughly meaning Leader of Venice or Chief Magistrate of Venice. They were elected for life by the city’s aristocracy. A total of 120 Doges lived in this palace from 697 AD to 1797 AD.

Museo Correr is a civic museum located in St. Mark’s Square. This museum has art, documents, artifacts, and maps that chart the history and daily life of Venice across the centuries.

Finally, we went on the gondola ride. We booked the gondola ride tickets online before leaving the USA. That was a mistake. We thought we were going to be riding on a gondola operated manually by a gondolier named Mario or Luigi who will be sporting a traditional hat. Instead, we were “taken for a ride” (literally and figuratively) in a water taxi. Since we travelled by water buses several times during the course of our 2 day visit, this water taxi gondola ride was not a big deal for us. It wasn’t exciting, special, or memorable in a positive way.

Marco Polo was born in Venice. The Venice International Airport is named after him.

Overall, we did fall in love with Venice and plan to return there again someday. It is one the world’s most beautiful cities. We were told that Venice is slowly sinking into the Adriatic Sea and will be completely submerged within the next 200 years. There is a famous saying about another Italian city: See Naples before you die. We now have a saying about “Venezia” (the city’s name in Italian): See Venice before it sinks.

June 19 arrived back home in the USA via stopover in London.