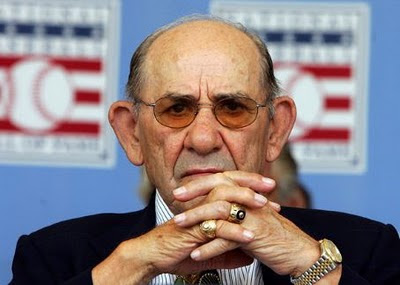 He is credited with this nickname by one of his school friends. This friend said that he resembled a Hindu holy man (yogi) they had seen in a movie.

Yogi is also one of the most quoted figures in the world. He is credited with coining the deceptively simplistic observation. He is also known for his botching and bungling. Here are some examples:

"You can observe a lot just by watching."

"He must have made that before he died." -- Referring to a Steve McQueen movie.

"I knew I was going to take the wrong train, so I left early."

"A nickel isn't worth a dime today."

"Nobody goes there anymore; it's too crowded."

"I take a two hour nap, from one o'clock to four."

"I made a wrong mistake."

"Thanks, you don't look so hot yourself." -- After being told he looked cool.

"Why buy good luggage? You only use it when you travel."

"The other teams could make trouble for us if they win."

"You should always go to other people's funerals; otherwise, they won't come to yours."

"I didn't really say everything I said."

"If the fans don't come out to the ball park, you can't stop them."

"It was impossible to get a conversation going; everybody was talking too much."
Posted by SG at 8:45 PM