Queen Elizabeth II of England visited the All England Club, for the first time since 1977, on Thursday, June 25, to watch a Wimbledon tennis match. She was introduced to some tennis players, past and present. She was introduced to Martina Navratilova. Martina was asked by the Queen if she played at Wimbledon often. Ever humble Martina politely answered yes. Martina has won 9 Wimbledon Championship in her career. Obviously the queen does not follow tennis. 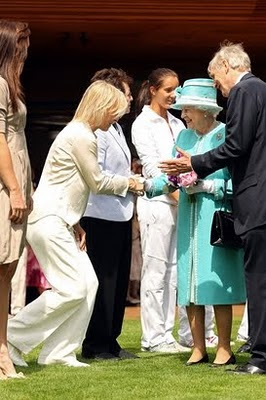 I thought that question to Martina was very funny. Again it is not funny. Here is why:

These kinds of meetings do not happen by chance. Believe me. I have been there. When a queen or king or president or prime minister of a country meets a group of sportsmen (or anyone), their aides would have prepped the VIPs who they are going to meet and shake hands and their accomplishments. The sportsmen would also have been informed in advance that the VIP will shake hands with him/her and there will be an exchange of pleasantries. At such a high level of dignitaries, everything is pre-arranged and nothing is spontaneous. It may look spontaneous to us watching on television.

Have you seen American Presidents get out of their bullet proof limousine and shake hands with the public in a crowd? Do you think it is spontaneous? The Secret Service Agents who guard the life of the U.S. President will never allow that to happen. It is all pre-arranged.

In this incident, the person who arranged the Queen to go to the Wimbledon tennis match failed. I would fire that person immediately. Now my imagination goes wild:

Again, President Barack Obama asking Michael Phelps (winner of 14 Olympic gold medals in swimming) whether he knows how to swim.

I think Patil, Obama, da Silva, and Harper are not that stupid. Nor their aides.