Yesterday, Christmas Day, we went to see Avatar 3D movie. This is an awesome movie.

Here is the plot. Jake Scully (Sam Worthington) is a paralyzed Marine. He was recruited for a top secret program to infiltrate an alien planet. This would give him a chance to walk again. This alien planet is called Pandora. The population is known as Navi. With some sophisticated lab work, he gets a Navi body. He can control his body through his mind. After several months of living with the Navi, Scully’s sympathies begin to shift after he falls in love with a beautiful Navi warrior girl (Zoe Saldana). My grading: C for the story.

Sam Worthington came out better than this role in Terminator: Salvation. Zoe saldana fares a lot better as a Navi.

Avatar is a solid exciting science fiction adventure. The sound is almost as amazing as the visual effects. They used the state-of-the-art 3D filmmaking techniques to create a visually stunning alien world.

AVATAR is one of the best movie experiences I have ever had.

This is a must-see film in the theater in order to fully enjoy the 3D visual effects accompanied by the incredible surround sound. After coming out of the theater we did not feel like we went to a movie. We felt like we spent more than 2 hours in the planet Pandora. 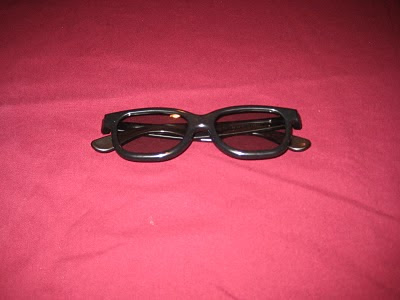 This is the 3D glass I wore in the theater. They let us take home these as souvenirs.
Posted by SG at 4:00 AM